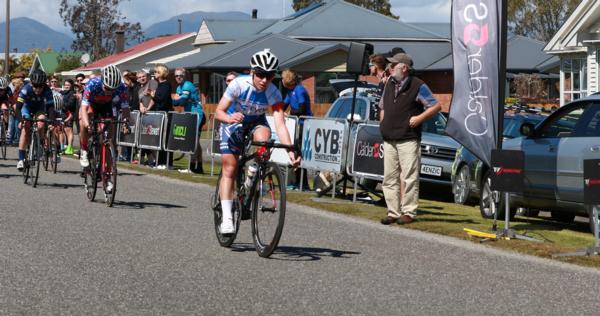 West Coast cyclist Sharlotte Lucas’s patience payed off as she won the fifth round of the women’s race in Calder Stewart Cycling Series, the CYB Construction Hokitika Classic held today on the South Island’s West Coast.

Lucas (Cycle Surgery) had missed the days key break and had to bide her time in the main peloton gambling the break would be caught. She rode a tactically very smart race, only expending energy when required, making two key efforts at crucial times in the closing stages with good support from Ella Harris from the Mike Greer Homes team that contributed to catching the leaders less than two kilometres from the finish line to win the 97 kilometre women’s race in two hours and forty six minutes.

“I missed the break so had to wait and hope we would see the leaders again,” Lucas said. “I knew I had good legs so was pretty gutted at missing the break. We only just caught the leaders in the closing stages, so once we did it was a matter of getting myself in the best position to go for the win, which I did, so I’m pretty happy to win at home in Hokitika.”

Benchmark Homes rider Else Fraser tried to bridge across to the leaders on the final lap, a move that forced the bunch to chase that saw the gap to the leaders rapidly come down in the closing kilometres.

Wanaka’s Mikayla Harvey (Mike Greer Homes) was second, enough to add to her lead over former pro triathlete Kate McIIroy (Benchmark Homes) in the battle for the women’s leader’s jersey with one round of the series remaining, the iconic Hell of the South near Leeston in rural Canterbury late next month. In an impressive ride McCallum was third while Deborah Paine added to her lead in the Small Business Accounting Queen of the Mountain competition.

Ollie Jones (PKF Waterproofing Concepts) beat Kees Duyvesteyn (L & M Group Ricoh NZ) and Ian Talbot (Joyride Cycle Surgery) in a sprint as the three were all that were left from a breakaway group of nine that had formed of the first lap of the 162 kilometre elite men’s race.

“It was a really big day on the bike straight out of winter,” Jones said. “I haven’t ridden that far since I’ve come back from racing in Belgium so I was kind of waiting until I cracked but I just felt good all day and everyone was rolling really well in the break so I’m really stoked to get my first win in the Calder Stewart Cycling series.”

The eight riders represented most of the teams in the race with Connor Brown, Brett Grieve, Daniel Reid, Jarrod Pidcock and Nick Ross combining with Jones, Duyvesteyn and Talbot to build up a lead that at one stage was over eight minutes on the third lap as the main bunch seemed content to let them battle it out up front.

On the fourth lap Jones, Talbot, Duyvesteyn and Team Škoda Racing’s Brown applied the pressure that saw the break whittled down to four with Brown dropping off the pace on the staircase climb, leaving the three remaining riders to battle out line honours with Jones winning in three hours and fifty eight minutes, ahead of Duyvesteyn who was second and Talbot.

The master’s race that contains three age groups saw eight riders go clear after 14 kilometres as the circuit turned inland off the main highway. Placemakers were well represented with Brent Allnut, Luke McPherson, Chris Karton and Brendon Akeroyd while Christchurch Mitsubishi had Glenn Rewi and David Rowlands. They were accompanied by Scott McDonnell (Champion System) and Hamish McDonald (Heartland Ricoh Cycling) and built up a two minute lead that at one stage was under threat as it was pulled back to 45 seconds.

On the final lap Karton and McDonald were dropped in the cross winds on the main road and then Akeroyd fell off the pace on the Staircase climb. Rowlands went first in the sprint, holding off Allnut and McPherson to win in three hours and twenty one minutes, further consolidating his lead in the 45 to 49 age group classification while Allnut increased his series lead in the 35 to 39 age group over his team mate McPherson.

Rowlands also moved into the Small Business Accounting King of the Mountains series jersey taking it off his team mate Rewi who was fourth over the line.

“It’s the first time I’ve raced in Hokitika so was great to win,” Rowlands said. “I enjoyed the extra distance and it was good, honest hard racing.”

Darrell Kircher (Christchurch Mitsubishi) was the first over 50 rider home, finishing second in the bunch sprint behind Lee Johnstone (Champion System), coming home three and a half minutes after the leaders, but Nelson rider Chris Nicholson (Freshchoice Richmond Pomeroys) retained his commanding lead in the series for the over 50s classification.