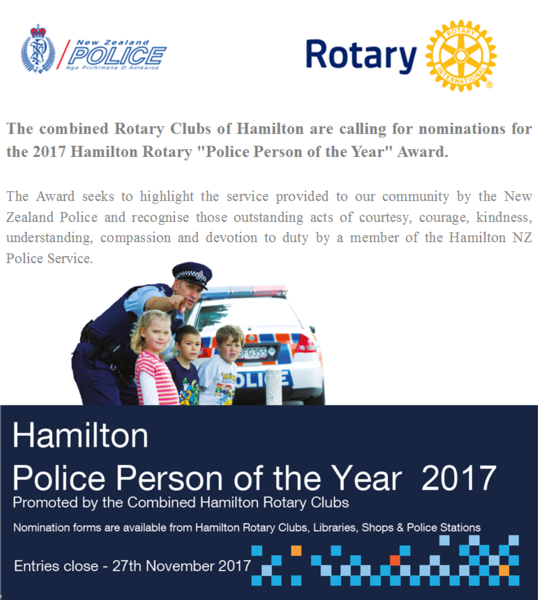 2017 Police Person of the Year Award

The combined Rotary Clubs of Hamilton are calling for nominations for the 2017 Hamilton Rotary "Police Person of the Year" Award.

The Award seeks to highlight the service provided to our community by the New Zealand Police and recognises those outstanding acts of courtesy, courage, kindness, understanding, compassion and devotion to duty by a member of the Hamilton NZ Police Service.

Each year's winner is chosen by a judging panel from nominations received from members of the public and groups in the community. This prestigious award is presented at the annual Police Pay Parade which is held each year in the Hamilton Gardens.

Nominations commence on Monday 16th October and close at 5pm on Monday 27th November. (Or at other such dates as agreed by the Selection Committee).

Nomination Forms are now available through the Public Libraries, Rotary Clubs or local Police Stations and they may also be down-loaded from here:    http://bit.ly/2gfnX53