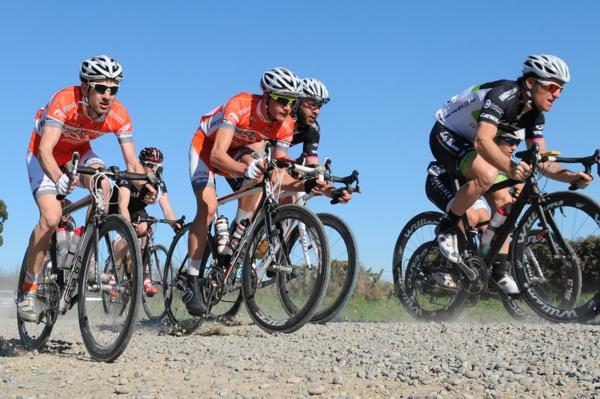 Gordon McCauley, Jason Allen and Anthony Chapman lead the charge on the gravel in the 2012 series. CREDIT: Bruce Wilson Photography

Elite field is the strongest the series has seen this year, full of riders preparing for the Tour of Southland

Leader’s jerseys are still up for grabs across the three race categories as the Calder Stewart Cycling Series heads into the final round on Sunday the Cycle Surgery Hell of the South that features notorious race defining gravel sections.

The series finale, contested over elite men’s, women’s and masters events, features two gravel sections in Canterbury’s Selwyn District near Leeston, south of Christchurch, that riders will tackle a number of times that will have a major impact on the racing.

The elite field is the largest and strongest the series has seen this year with elite men’s series leader Paul Odlin (Tineli Invitational Team) looking to repeat his overall series win from 10 years ago.

“It's certainly going to be a great challenge to hold into the leader's jersey and this will be my main objective for racing on Sunday,” Odlin, who runs a cycle coaching business in Christchurch said. “I'm relishing the pressure and excited by the fact that there are so many contenders for the overall win. My tactic will be to race hard as that's always the most enjoyable way to race. My biggest threat will probably be puncturing on the gravel, but after a recce I can see they're actually not too bad.”

Odlin is just one of many riders using the event as a last hit out before the SBS Tour of Southland that starts in Invercargill next Sunday.

Dunedin cyclist Brad Evans looms as a key rider to watch on Saturday as the 2015 Tour of Southland winner who rides for Australian Continental team Drapac Pat’s Veg Cycling is keen to make up for two years ago when he lead the series into the final round to only then lose the title on a countback to Michael Vink.

“I really like the course and the gravel sections suit me as they require good bike handling skills,” Evans said. “It's a fun hard race that always has a worthy winner and I'll be aiming to be as aggressive as possible.”

Evans plans to keep an eye on Vink, who has won this round twice and is lining up on Saturday with Mike Greer Homes after a season racing in Europe, and Odlin, knowing both are always in good form for this race and know the route well. “If I win it would be a nice confidence boost going into the Tour of Southland next week.”

With two pervious wins on the gravel Vink knows the course suits him well. “It’s only one week out from Southland so I want a good performance to build confidence,” Vink said.  “My Mike Greer Homes team also has lofty ambitions so we really have our work to cut out for us if we want to walk away from the series happy.”

Vink is clear he’s aiming for his third win in the Hell of the South on Sunday to set him up for a good domestic summer where he is focused of strong performances in Southland and in the time trail and road race at January’s New Zealand Elite Road Championships in Napier.

“The biggest threat in a race like this is often yourself,” he said. “You have to focus on riding your own race and getting all the small things right before thinking about anyone else. There are so many variables in a race like this that it's important to take control of the things you can and to put yourself in a position to capitalise on any piece of luck that may present itself.”

Former New Zealand speed skater and national Under 23 cycling representative Ollie Jones (PKF Waterproofing Concepts), who won the previous series’ round, the CYB Construction Hokitika Classic on the South Island’s West Coast, is another rider heading to Southland in good form who should feature.

Team Škoda Racing line up for the Hell of the South for first time but team spokesperson Brad Tilby is confident the team will make its presence felt. “Although we haven’t raced the Hell of the South before we have completed in the Gravel and Tar Classic in the Manawatu twice. We managed to win the teams section at the Gravel and Tar with Alex (West) finishing second this year.”

Tilby says the biggest variable is tyres and ‘how many punctures you don't get.’ “Our biggest learning from the gravel and tar was to ride tubulars to reduce pinch flats and we will do the same on the weekend.”

Jake Marryatt (Blackmax Performance) has a narrow five point lead over Ian Talbot (Joyride Cycle Surgery) in the Under 23 classification while Corbin Strong will be looking to hold onto the Under 19 leader’s jersey. Odlin has the Small Business Accounting King of the Mountain’s jersey secured for the year. Mike Greer Homes has a two point lead over PKF Waterproofing Solutions in the race for the team’s title.

“The Hell of the South is always an interesting, awesome race and it’s always a bit of fun racing on gravel,” Harvey said.

“At home I do a decent amount of riding on gravel roads, so I’m always excited to race on some gravel. The main dangers though are getting punctures, so fingers crossed my tyres hold out, but I have a good crew around me so if anything does happen we are prepared for speedy changes.”

Harvey plans to race aggressively, knowing it is a tight competition for the leader’s jersey. “I personally don’t like riding too defensively and the team definitely has some good tactics planned to keep the jersey. Anything could happen on Sunday, especially with the points being so close, so I’m going to be keeping a close eye on Sharlotte and Kate (McIIroy Benchmark Homes).”

Former pro triathlete McIIroy lost the leaders jersey to Harvey in the third round while Lucas, who rides for Australia women’s team Roxsolt Attaquer, may well have been leading the women’s classification in the series if it wasn’t for missing out of points on the opening round as she rode as an individual so was not eligible for points.

“I think it will be tough to win the series as Mikayla has quite a big point’s buffer,” Lucas said. “Her team has also been solid all series and I think they have shown how to commit to riding for the leader well but I’ll be there for a hard race on Sunday and hopefully the other teams step up and make it a challenge for Mikayla and the Mike Greer team.”

Lucas said the gravel sections look “pretty tame” so is picking a bunch sprint where she would have to win well ahead of Harvey to claim the series for the fourth time.

“I have won the series for the last three years so well try my hardest to get a result that counts but I’m expecting Mikayla to hold onto the jersey so full credit to her and her team for how consistent they have been all series. She has shown she is a super talented all round bike rider.”

Annamarie Lipp (Benchmark Homes) has a nine point lead over Niamh Fisher-Black (Mike Greer Homes Black) in the battle for the Under 19 jersey while Jeannie Blakemore (F.A.S.T Cycling Team) has a good 14 point lead over her teammate Amy Hollamby in the senior over 35 classification.

Mike Greer Homes Black and Benchmark Homes have a lot to ride for in the teams classification with both teams locked at the top the points table on 44 points. Deborah Paine (F.A.S.T Cycling Team) has the Small Business Accounting Queen of the Mountains jersey.

Masters 45 to 49 age group leader Wellington’s David Rowlands (Christchurch Mitsubishi) who has dominated the masters series is racing in New Caledonia and his absence opens up an opportunity for Christchurch cyclist Scott McDonnell (Champion System Blue) to claim the leader’s jersey.

McDonnell has performed well throughout the series notching up two seconds and two thirds in the 45 to 49 classification Rowlands has won four times, to lie in second spot, 16 points adrift.

Missing Rowlands has opened up the master’s race that features three age group classifications to a number of contenders for overall line honours on Sunday that includes his teammate Christchurch cyclist Glenn Rewi.

“We’ve had no Dave (Rowlands) for the last round for the last couple of years with him racing the Tour of New Caledonia,” Rewi said. “I was second here last year after being in the main breakaway so I’m keen to try and go one step higher this year.”

Rewi is competing as a master in the Tour of Southland, his first time racing the tour since 2007, so hopes to have a solid final hit out before heading to Invercargill.

“The gravel sectors are great,” Rewi said. “It’s fun to rip it up and string the peloton out and adds an interesting dimension for the spectators. It’s a power rider’s course; position will be key, especially if the wind picks up like it did last year.”

Rewi says he will be keeping a watchful eye on the powerful Tim Dalgliesh (Champion System Yellow) and Invercargill’s Luke McPherson who won the elite race in this round two years ago, beating Vink in a sprint after an impressive breakaway ride by the two riders.

McPherson is well placed to take the masters 35 to 44 leader’s jersey off his Placemakers team mate Brent Allnut who is not racing while Chris Nicholson (Freshchoice Richmond Pomeroys) should hold on his lead in the over 50s classification over Christchurch rider Blair Stuthridge (Protcol Mackleys Yellow).

Christchurch Mitsubishi have the masters team’s classification wrapped up while Rowlands has won the Small Business Accounting King of the Mountain masters jersey for the series on a count back over his teammate Rewi as the two are locked on 25 points.

The elite men’s race will see riders do four laps of the 36 kilometre circuit to race over 144 kilometres while the women and masters will do three laps covering 108 kilometres.