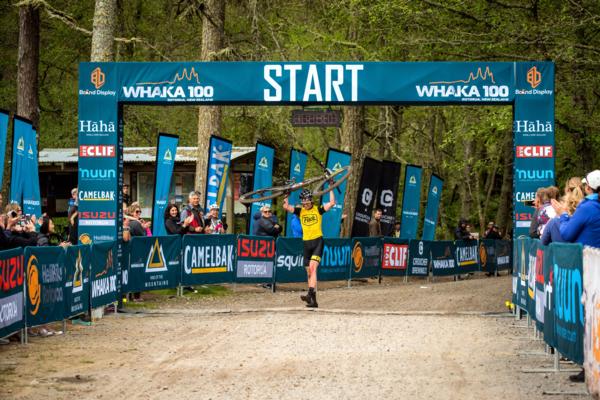 Wilcox and Crossling dominant at Whaka 100

It was a day of fresh faces and race best performances as Josie Wilcox and Edwin Crossling dominated the 11th edition of the Whaka 100 MTB Marathon on Sunday.

Manawatu based Josie Wilcox has completed her march to the top of the NZ Crown National MTB rankings, taking over the #1 sport with a superb performance taking out the prestigious Whaka 100 on Sunday.

Widely regarded as one of the toughest one-day MTB races in New Zealand (if not the southern hemisphere), Wilcox made a mockery of her rookie status as she simply rode away from the start leaving her rivals to fight over 2nd place as she mixed it with the top men.

“I didn't want to go too hard because I haven't really ridden over five hours before, but I think I paced it pretty good.” A humble Wilcox would say at the finish line. ‘Pretty good’ was very good. On a course arguably even tougher than last year, Wilcox finish time of 6hr12min sliced more than 30min from the previous course best set by Kim Hurst. Perhaps even more impressive was the fact that Wilcox crossed the line an outstanding 12th overall in a field of nearly 200

"I was really happy, I trained pretty hard for it. It was wicked, there was heaps of climbing, heaps of descending, it was awesome.”

Christchurch’s Jeanette Gerrie improved on her own 2016 performance by more than half an hour, but even that was no answer to the imperious form of Wilcox. Gerrie would finish a lonely 2nd, ahead of fellow Manawatu rider Sarah Haddon taking third in 07:03:30.

While Wilcox was stunning on debut, it was one of the Whaka’s most popular veterans taking a fairly-tale maiden win in his 5th attempt at the distance.

Wellington rider Edwin Crossling had been affectionately dubbed “the fastest man to never win the Whaka” prior. Three previous 2nd place finishes had Crossling determined to shake off the bridesmaid tag.

However come race day, the likeable Wellingtonian showed all his experience as he stuck to his game plan, showing restraint early, before dominating the back half of the race to secure a hard earned win ahead of Cambridge’s Cosmo Bloor. Australian endurance racing legend Jason English rounding out the podium in third.

"My one and only goal for this weekend was to win today” said a relieved Crossling at the finish. “This is pretty much top of the list, in terms of mountain biking it's the one I wanted to get because it really is so hard. I've done lots of other cool races, New Zealand has heaps of cool events, but this is the one I really wanted."

Bloor put up a strong fight, riding wheel to wheel at the head of the race for the first 50km, but ultimately had to submit to the relentless tempo set by Crossling.

The current #1 on NZ Crown national rankings, Crossling has won many of New Zealand’s biggest races. But nothing compares to the Whaka. "There was so much climbing today, it really is the hardest race that I have ever done. I've done a lot of road races and mountain bike races around the world – but it is just brutal.” But he’d clearly learnt from his previous attempts at the race.

"It just went perfect today, I stuck to my plan, nutrition, everything went just as I wanted and I felt great the whole day," Crossling said.

One of the toughest indeed, the Whaka 100 truly lives up to its reputation.

For the full results go to http://whaka100.co.nz/results.html