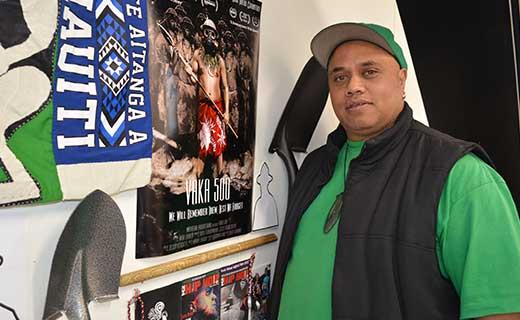 A little-known war story has inspired Toi Ohomai student, Mita Tahata, to make a short film which has been selected to screen at the Pollywood Pasifika Film Festival in Auckland this month.

His documentary, Vaka 500, takes its name from the art exhibit curated by Pasifika artist NiaVal Ngaro Tali to honour the 500 Cook Island soldiers that fought for New Zealand during the First World War.

When Mita heard about the soldiers, he was immediately captivated.

“I didn’t know there was Polynesian soldiers in WW1; that really grabbed my attention. I found out that ninety-two percent of them didn’t know English when they signed up to fight for New Zealand. They would’ve gone from bare feet to army boots.”

Mita, who is studying the Bachelor of Creative Industries degree majoring in graphic design, needed a project for his final year. He offered his creative services to NiaVal who, running the project on a shoestring, gladly accepted.

Mita joined the Vaka 500 exhibition as it left New Zealand for Europe. He filmed as it debuted in London, then travelled onto France where a group of Cook Islanders paid homage to the soldiers at the Wall of Remembrance in Arras, France.

“We were the first group of Cook Islanders to visit two of the headstones and lay shells on them.”

“These soldiers helped dig the underground tunnels,” Mita explains. “They were underground day and night for over a year, digging and laying explosives, fighting the Germans.”

Mita appreciates the support from his tutors at Toi Ohomai who suggested he contact BOP Film as he committed to take on the documentary project as part of his studies.

“I had so much help from Anton Steel and Tessa Blackett from BOP Film, and from [historian] Sue Baker-Wilson who helped to get us down into the tunnels.”

While admitting that war research is tragic, Mita says it’s crucial to keep the stories alive.

“We can bring these stories into a better light through art. We can tell the story again and introduce it to people. I’ve educated my whole class and all my tutors. It’s given me a passion to continue to make short stories, films and documentaries.”

Vaka 500 is one of eight short films being shown at the Pollywood Pasifika Film Festival in Auckland this month.

The films will be screened at the Mangere Art Centre on November 4 and at the Auckland Art Gallery on November 18.