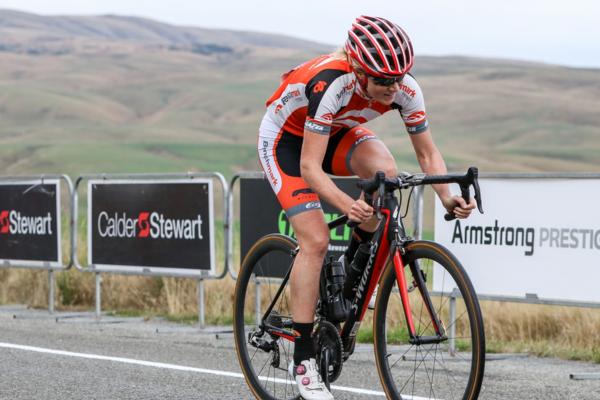 Last year's women's winner of the Armstrong Prestige Dunedin Classic Kate McIIroy is racing in the opening round of this year's Calder Stewart Cycling Series on Saturday as part of her build up to next month's Commonwealth Games on the Gold Coast in Aus CREDIT: rickoshayphotos

Sharlotte Lucas and Kate McIIroy are racing in the opening round of this year’s Calder Stewart Cycling Series on Saturday, the Armstrong Prestige Dunedin Classic, as part of their build up to next month’s Commonwealth Games on the Gold Coast in Australia.

For McIlroy it will be her third Commonwealth Games in her third different sport after representing New Zealand in Melbourne in 2006 were she was fifth in the 3000-metre steeplechase in athletics, and then in Glasgow four years ago were she was 10th in the triathlon.

What makes her sporting endeavours even more impressive was she first made her mark in mountain running, winning the World Mountain Running title in Wellington in 2005 which saw her named Sportswoman of the Year at the Halberg Awards.

Lucas (Velo Project) and McIIroy (Lightworkx Photography) will have last year’s women’s Calder Stewart Cycling Series winner Mikayla Harvey from the Mike Greer Homes team to contend with. All three raced in the women’s Santos Tour Down Under in Adelaide in January were Harvey was runner up in the young rider’s classification.

Harvey’s Mike Greer Homes team mate Georgia Catterick, Velo Project’s strong climber Kirsty McCallum and Jojo Bauer should all also feature on a course that features four laps of a flat 120 kilometre circuit for the elite men and three laps and 95 kilometres for the masters and women before riders tackle a tough 14 kilometre climb up Lee Stream Valley.

McIIroy won this round last year dropping Lucas, who was suffering from an upset stomach, and Harvey on the final climb.

“The course is great and suits my strengths,” McIIroy said. “With my recent inclusion in the Commonwealth Games team I am using this as a solid hit out and am super excited to be racing with an epic hilltop finish. The Lightworkx Junior Women's Development Team is just starting out and I'm excited to help play a part with my sporting experience to promote and build the future of female cycling.”

Three time Calder Stewart Cycling Series women’s winner Lucas was also looking forward to this Saturday. “I am in the middle of a big training block heading toward the Commonwealth Games, so I do expect the legs to be a little tired for this one,” Lucas said.

Harvey is also keen to get her Calder Stewart Cycles Series campaign underway, saying the Dunedin round always makes for an interesting race. “Obviously, the last bit of the course is a little gnarly with the climb, making majority of the race very tactical on the flat circuit,” Harvey said. “There will be a lot of interesting tactics coming from all the teams.”

“I am currently in a big training block leading into Oceania Champs and my season of racing overseas. The race this weekend will act as a good way to give the legs the extra bit of kick they need to prepare myself for the up and coming season.”

Dunedin based Brad Evans (PKF Waterproofing Concepts), who finally gets a crack to race in his home round of the series after having to miss previous years due to timing conflicts with his Australian professional continental cycling team, looms as the man to watch in the men’s race that also features under 23 and under 19 classifications.

“I'm really excited to do an elite series race on my home patch,” Evans said. “I've had overseas commitments the last two years. It's a really tough course and hopefully for me the wind blows as well and it will be a true hard man’s day not just for the climbers.”

Evans returned to the track last week at the national championships where he won the points race, scratch and madison events. He is building for his next overseas block of racing with his Mobius BridgeLane Continental pro team in the United States at the Tour of Gila and Redlands Classic.

The Mike Greer Homes and PKF Waterproofing Concepts teams look strong and Transport Engineering VeloSouth and the Moore Stephens Markhams Canterbury Development Team also have solid line ups with a number of riders in a build-up phase for the Oceania champs in Tasmania at the end of March.

Team Skoda Racing come into the weekend a little on the back foot with only six riders starting after a horror run of injuries and several riders not backing up after the recent New Zealand Track National Championships but will look towards New Zealand's under 19 World Championship representative Ben Hamilton and Max Jones to fly the flag for the team.

Racing will be in two parts, the flat circuit that should see some aggressive racing, especially if the wind blows, which will see breakaways escape across the three races and attempt to build a winning lead before the final climb up Lee Stream Valley.

Teams across the men’s, women’s and master’s races will all have to be attentive to the composition of the breakaways and what teams are represented as the racing builds towards a final showdown on the climb.