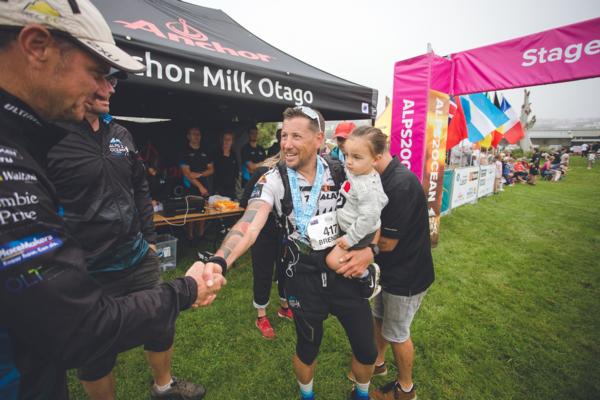 Jane Ovington from the UK finished strongly over the final stages of New Zealand's first staged ultra-race the Back Country Cuisine Alps 2 Ocean to win the gruelling 316 kilometre unsupported women’s event that finished in Oamaru today.

Ovington made up more two hours of time over the final three stages to take the lead off vastly experienced ultra-runner French physiotherapist Florence Morisseau recoding the fastest women’s time overall of two hours and 32 minutes on the final stage to finish with a running total of 46 hours and 31 minutes for the week of racing, just twenty minutes ahead of Morisseau.

“I’m tied but relived, it was such a good race,” Ovington said. “It was just amazing scenery. You have to remember to stop and look at the stunning areas we were in; the whole thing really was amazing and to come home first was a great bonus.”

Local Oamaru ultra-runner Wendy Fallen who also finished strongly to climb up to third in the women’s unsupported event with a combined total of just 43 minutes behind Morisseau said she was so proud about having the event in her own back yard.

“It’s been awesome,” she said. “We’ve got such beautiful countryside so it’s been lovely to share that with everyone this week, and there was so much that I hadn’t seen before either so it was a real treat for me to go to those places too.”

After 35 hours of running over seven days Australian supported runner James Kohler was the fastest overall coming across the finish line with the leading unsupported runner, Brendon Thompson from Wellington. The two men took two hours and thirty one minutes to run the final 28 kilometres of the seven stage ultra-race that started at Mt Cook on Sunday.

Thompson led the tough unsupported men’s event from the start finishing 51 minutes ahead of kiwi Grant 'Curly' Jacobs in the tough category where competitors have to carry their own packs with all their gear. Garth Reader from the Unites States finished third, 38 minutes behind Jacobs.

“I’m absolutely stoked to finish,” Thompson said. “The event has attracted so many people from all over the world and the organisers have just done such an awesome job.”

The seven stages took Kohler 35 hours and 23 minutes while Thompson had a running total of 37 hours and 15 minutes.

Australian Sam Yarnold won the female supported race with a running total of 40 hours and 46 minutes, finishing 47 minutes ahead of New Zealander Toni Smith who was one hour and 24 minites ahead of third placed Michelle Donnell. .