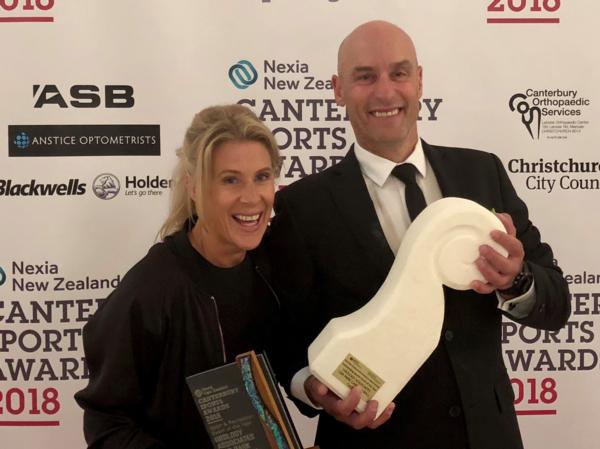 “What set this urban cycle race apart was the strong sense of innovation,” he said. “This first-time event leveraged the current Christchurch mindset – a city embracing new approaches, and the appetite of Cantabrians for everything on two wheels.  It bought enthusiastic crowds into our new city, ready to be entertained and see something never done in a New Zealand car park before – it was bound to be a winning formula.”

“It was amazing to win and was a win for cycling too,” Urology Associates Car Park Cannonball organiser John McKenzie from enthuse media & events said. “It was great to be recognized for all the effort made for a new innovative event in its first year.”

With a DJ, band and energetic MC providing a party atmosphere, spectators enjoyed the event’s hospitality as 120 riders battled it out as the sun set over the city skyline providing a spectacular night of entertainment in late November last year.

“It really was something very special,” McKenzie said. “There hasn’t been an event quite like this ever held in New Zealand and to do it to raise awareness for men’s health and Movember made it even better; it exceeded everyone expectations and to cap it all off by winning the Nexia New Zealand Sports Event of the Year for Canterbury has made it even more special.”

Held in the eight story Innovation Car Park building the event attracted 2000 people with the fastest riders taking just over a minute to reach the ‘party on the roof’ in a series of knock out races after the initial qualifying round.

The event was part of the new aBLOC world series and was the only southern hemisphere round after two successful events in the Netherlands. This year’s Christchurch event is planned for Saturday the 1st of December.

“It really was a team effort with so many contributing to the success of the night,” McKenzie said.  “It was fantastic to see the inner city buzzing with the event with so many people coming down to watch, and many of them weren’t cyclists or cycle fans; we can’t wait to do it all again even bigger and better this year.”

Planning is underway for this year’s event with McKenzie saying there are a number of changes to improve on the award winning formula. “The feedback we had was very positive and that’s really encouraging as we think it’s a pretty special formula that makes for a very exciting, energetic event that provides such spectacular and unique entertainment.”

McKenzie paid tribute to the Christchurch City Council who provided seed funding for the event and to the events sponsors, saying many of them went well beyond their sponsorship to support the event.

“The support we had was outstanding, with some of our sponsors physically rolling their sleeves up to step up and help out to make the event the success it was. We just couldn’t have done it without the support of Urology Associates, Fulton Hogan, Opus, Hirepool, NZME and Radio Hauraki, Specialized and Chain Reaction Cycles, Kathmandu, SMITH optics, Champion System, Revbox NZ, NZ Cycling Journal and Innovation Carpark Limited/Lichfield Lanes development. Bring on this year.”