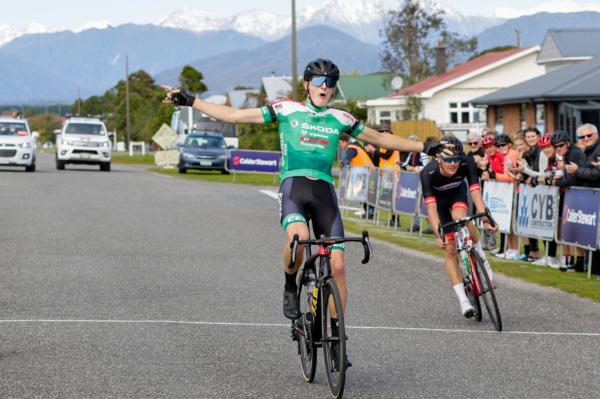 Southlander Matt Zenovich lost and then regained the leader’s jersey for the elite men and Ella Harris grabbed the women’s leaders’ jersey off the absent Kate McIlroy who was racing in the Commonwealth Games after an exciting double header weekend of racing in the Calder Stewart Cycling Series in Hokitika.

It was the first time the series has held two road races over a weekend and it delivered some exciting racing in rounds two and three that saw riders take on a shortened circuit numerous times on Saturday and then today tackle a 58 kilometre route through Kokatahi and back country rural roads past Lake Kaniere that featured a dirt section of 10 kilometres.

Zenovich (Transport Engineering Velo South) was eleventh in Saturdays 162 kilometre CYB Construction Hokitika Classic that was won by Bailey O’Donnell from Team Škoda Racing in three hours and 53 minutes who out sprinted Michael Vink (Mike Greer Homes Racing Team) after the two had escaped from the main peloton.

“Saturday was an unreal race and I didn't expect to be off the front for that long and stay away but when it was just Vink and myself I started to think I might actually make it to the finish,” O’Donnell said.  “When we found out we had 56 seconds we started playing around for the sprint and I just happened to have the legs to get around him at the end.”

Horgan had managed to get away from a group of 11 riders that saw Kiaan Watts (Team Skoda Racing) just squeeze ahead of Paul Odlin (PKF Waterproofing Concepts), and Zenovich to claim second, 10 seconds behind Horgan’s winning time of one hour and twenty minutes.

“I was really happy to take the win today after a strong effort by my whole team,” Horgan said. “It was one of the most fun bike races I have done; the short distance meant it was fast and aggressive right of the line and the gravel around the lake really was a real challenge so thanks to the organisers for trying something new.”

Mike Greer Homes took control of the peloton in today’s men’s race and delivered Vink and Horgan into the gravel section at the front of the race. The gravel reduced the bunch down to 11 leaders and after a series of attacks in the closing kilometres to Hokitika Horgan took advantage of a lull in pace and attacked with 10 kilometres remaining, holding on for the win.

Saturday in the elite men’s race saw a more tactical approach than today’s short race with the series leaders all marking each other heavily. Vink was in strong form forcing the break of the day with O’Donnell but failed to shake off the young rider and had to settle for second.

Zenovich retained the King of the Mountains series jersey after the weekend of racing while Duyvesteyn and Finn-Fisher Black (Team Skoda Racing) will take the Under 23 and 19 jerseys into round four next month.

Wollaston made an impressive debut in the Calder Stewart Cycling Series and showed she packs a powerful sprint something the first year under 19 rider has fine-tuned with an impressive record on the track as the current national under-19 pursuit, Points, Omnium and Scratch race champion. She is working towards representing New Zealand in the UCI Junior World Track Cycling Championships in Switzerland in August.

“The bunch was slowly narrowed down in numbers throughout the race however it was still up to a sprint finish in the end,” Wollaston said referring to Saturdays racing. “It was a long lead out to the sprint and pretty stressful trying to pick out good wheels but I just managed to time the sprint right.”

Wollaston was impressed with Saturday’s aggressive race and is looking forward to racing again in the series. “It was my first ever Calder Stewart race and I was pretty impressed with the high level of racing that was produced,” she said. “It was awesome to get the win for the team and to end up winning the team’s category for that day. Leading the series after round three is an awesome feeling and makes upcoming races pretty exciting.”

On Saturday the masters race that contains three age group categories stayed together on the first lap then on the second lap an attack went which was quickly closed down but was then followed by a counter attack by Rowlands that saw 10 riders escape.

Rowlands cleaned up the King of the Mountain points as riders gradually fell off the fast pace. A powerful effort by Rowland’s team mate Glenn Rewi on the final lap left Rowlands out in front to ride for the win.

“I’m finally getting some form back after a rib fracture in a January crash,” Rowlands said. “Today’s course was good although it could be a nightmare in rain.”

Rowlands made his move in today’s race on a hill at the start of gravel section wanting to stay well clear of any trouble and his effort saw him joined by Karton, Spence and Martin and they quickly went to work to build a winning lead.

“The group worked well,” Rowlands said. “With the next group bearing down we put the gas on with ten kilometres to go and I managed to take the sprint from Chris (Karton).”

The next race in the series is in Timaru on Saturday the 5th of May.