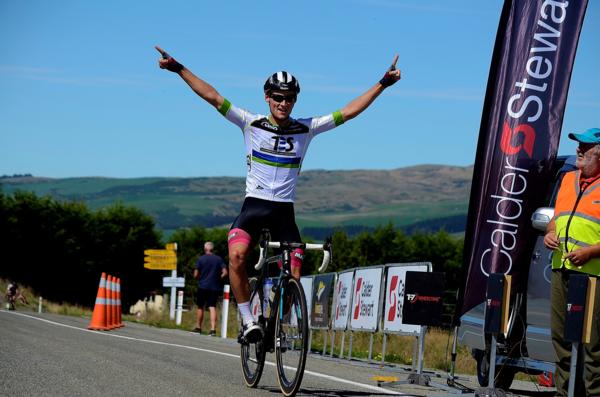 Southlander Matt Zenovich, winning the first round of the Calder Stewart Series in Dunedin this year, is keen to win the Kiwi Style Bike Tours Timaru Classic for the second year in a row to keep his elite men's series lead over the winter months. CREDIT: Rachel Harris

It’s a different course but Southlander Matt Zenovich is keen on the same result as last year while women’s professionals Kate McIIroy and Sharlotte Lucas return to the series after missing the previous two rounds due to Commonwealth Games commitments as round four of the Calder Stewart Cycling hits Timaru on Saturday.

The pair were first and second in the opening round in Dunedin and will be very keen to close the gap to Mike Greer Homes Dunedin student Ella Harris who has a six point lead over Kirsty McCallum (Velo Project) in the women’s standings.

The Kiwi Style Bike Tours Timaru Classic will see the elite men tackle 139 kilometres while the masters and women will race over 92 kilometres on a new Timaru route for the series where the wind could play a vital role on a relativity flat course if it blows.

After winning the first round in the Armstrong Prestige Dunedin Classic Zenovich (Transport Engineering Velo South) lost the elite men’s leaders jersey in the first race of a double header weekend in Hokitika last month to Dunedin’s Kees Duyvesteyn (NZ Cycling Project Ricoh) before claiming it back the following day; he now has a seven point buffer over the Under 23 series leader Duyvesteyn who is three points ahead of Christchurch cycling coach Paul Odlin (PKF Waterproofing Concepts).

“Last year I won the Timaru round and would be happy to have a repeat of that even with the course change,” Zenovich said.

“The new course looks a little boring on paper but hopefully there is a bit of wind around to make things interesting. I liked the old course but having a change every few years is great too.”

Zenovich is conscious he only has a small buffer and aims to try and hold his lead over the winter break the series has but he is also taking his leadership role with his young teammates quite seriously as he focuses on helping them develop as riders and coming to grips with the tactics required to race as a team at an elite level.

“I'm happy with how they are developing in just three rounds as they have learnt so much so hopefully this weekend we can put their learnt skills to good use. The ultimate win for me and the team in the up and coming rounds would be if one of the under 19 riders gets a win.”

Zenovich also leads the Small Business Accounting King of the Mountains classification and Finn-Fisher Black has a two point lead in the Under 19 classification over Team Skoda Fruzio teammate Ari Scott.

With Team Skoda Fruzio’s Black, Corbin Strong, Kiaan Watts and round two winner Bailey O’Donnell all preparing to head to the Junior Track Cycling World Championships in Switzerland in August the young team has plenty of fire power so should feature as they look to defend their 16 point team’s classification lead.

The current national under-19 pursuit, Points, Omnium and Scratch race champion Ally Wollaston made an impressive debut in the women’s series in Hokitika last month with a win and second place. How the Velo Project team approach this weekend with Lucas back and racing in their colours and McCallum lying just one point above Wollaston in second place will be fascinating.

Lucas, who has had a break off the bike after the Commonwealth Games is back training as she builds towards leaving to race in the United States in two weeks. She also won this round last year but is weary her form may not be great but is keen get some racing in before heading overseas.

McIIroy has also taken a well-earned break after the Commonwealth Games not touching her bike for over two weeks so says she will either be “super fresh for the weekend or still waiting for my riding legs to come back.”

“I’m looking forward to racing for the Lightworkx Photography junior development team and focusing on helping the younger riders coming through,” McIIroy said. “It’s been a pretty full on six months of racing so I have been enjoying being unstructured and going for the odd run again.”

Wollaston leads the Under 19 series from Britney Kerr (Mike Greer Homes Women) with the pair locked on the same points while Jeannie Blakemore (Cycle Surgery Bartrams) leads the senior over 35 classification. McIlroy (Lightworkx Photography) still has the Small Business Accounting Queen of the Mountain’s jersey after her opening round win.

Riding as an individual leading Kiwi triathlete Andrea Hewitt is making her second appearance in the Calder Stewart Series after riding in an early round last year.  Currently ranked seventh in the world in triathlon she showed she could foot it with New Zealand’s leading domestic based women riders mixing it up at the front of the race eventually finishing fourth, so just how her form is after competing in the Commonwealth Games in triathlon will add some more interest to the women’s race.

Velo Project has a narrow two point lead in the team’s points over Mike Greer Homes Women who are missing Mikayla Harvey and Grace Anderson who are racing overseas.

Just who can beat Wellingtons David Rowlands (Christchurch Mitsubishi) in the masters racing will again be the mission for riders in the three age group categories.

Rowlands won both races in Hokitika in contrasting fashion to add to his win in Dunedin. Chris Karton (Heartland Ricoh Cycling) has a three point lead in the 35 to 44 age group over Blair Martin (Cycle World Emersons) who is five points ahead of Glenn Rewi (Christchurch Mitsubishi) while Rowlands has a 15 point lead over Justin Sims (Armitage Williams) in the 45 to 49 classification.