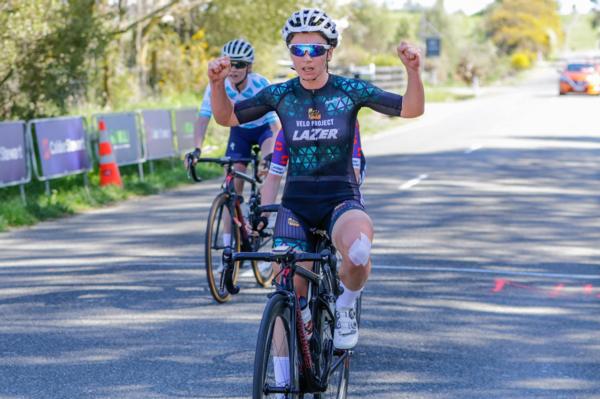 Oceania women's' road race champion Lucas showed why she is one of the best and quickest female professional riders in this part of the world, winning the fifth round of the Calder Stewart Cycling Series in Nelson today CREDIT: rickoshayphotos

Favourites step up in fifth round of Calder Stewart Cycling Series

The favourites all stepped up with Sharlotte Lucas, Paul Odlin and David Rowlands all winning in the fifth round of the Calder Stewart Cycling Series in Nelson today.

The Christchurch Cycle coach showed he still packs an impressive sprint, being more than a match for some of New Zealand’s best domestic based professionals and elite riders. Odlin, who last won the series overall in 2007, now holds a seven point lead over Vink ahead of next month’s iconic Hell of the South series ending race that includes gravel roads in rural Canterbury, and a short punchy race round the bays and over the Port Hills near Christchurch.

Age does not seem to be slowing Odlin down, as the 2013 Oceania time trial, 2012 Oceania road race, 2011 Tour de Korea sprint ace winner and 2012 National Time Trial champion is now well placed to claim the record as the series oldest elite men’s winner.

“Team PKF Water Proofing Concepts did an amazing job of looking after me all day so I could unleash in the sprint,” Odlin said. “I’m now really looking forward to the next round.”

Oceania women’s’ road race champion Lucas showed why she is one of the best and quickest female professional riders in this part of the world, winning the women’s 102 kilometre race in two hours and fifty three minutes out sprinting her Velo Project team mate and series leader Kirsty McCallum and fellow Commonwealth Games representative and Australian Professional Specialized team mate Kate McIIroy who was riding for Lightworkx Photography. McIIroy retained the Small Business Accounting Queen of the Mountain series lead.

Wellington’s David Rowlands (Christchurch Mitsubishi) backed up his pre-race favouritism winning the 102 kilometre masters race that includes three age group classifications in two hours and thirty five minutes, getting away from Scott McDonnell (Heartland Ricoh Cycling) and Neil Cleghorn (Armstrong Prestige Dunedin) in the closing stages for an impressive win to all but secure the 45 to 49 Age group series title with two rounds left.

Kircher came home one second behind Chris Karton (Heartland Ricoh Cycling) who still leads the 35 to 44 age group while Rowlands added more points to his lead in the Small Business Accounting King of the Mountains Points Classification.