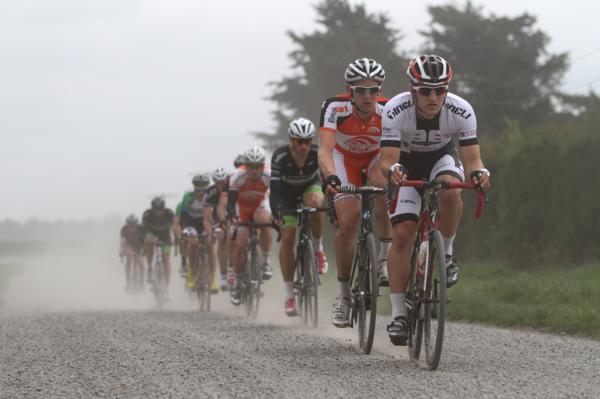 Dylan Kennett followed by Sam Horgan and Marc Ryan lead the charge over the gravel in the 2013 hell of the South CREDIT: Bruce Wilson Photography.:

The elite men’s race is shaping up as a showdown between New Zealand’s best domestic based riders and a number of professionals returning from long overseas seasons as the Calder Stewart Cycling series hits Canterbury for its final double header weekend of racing.

“It’s going to be an awesome showdown this weekend,” series organiser Jake Rowse from Revolution events said. “There’s all the guys based in New Zealand looking forward to taking on the pros’ coming back from overseas – it’s going to go off.”

Sunday sees the iconic Cycle Surgery Hell of the South that features two notorious race defining gravel sections in Canterbury’s Selwyn District near Leeston, south of Christchurch, that riders will tackle a number of times that always has a major impact on the racing.

Hamish Schreurs from Christchurch, who was a revelation in the second part of the pro season riding for his Professional Continental team the Israel Cycling Academy with strong displays in the Tour of Austria and Tour of Utah before a final hit out for his team in China at the Tour of Taihu Lake last month, is back home and racing this weekend for the Moore Stephens Markham's Canterbury development team carrying some niggling knee pain.

“It’s definitely been a long season that started in January and is now finishing mid October but with the race so close to my last race in China I thought why not do it,” Schreurs said.

“I did have to pull out of my last race (in China) because of my knee but it has made improvements so I need to check that the knee is all clear as it hasn’t been great but I still have a few days off the bike to get it better.”

Schreurs, who has not raced in the Calder Stewart Series for a number of years, is looking forward to racing around the Lyttelton Harbour Bays, something not seen since the regions devastating earthquakes.

“I think it’s great racing around the bays and it will be a good opener for the day after on the gravel,” he said. “I’ll be coming in fresh with 10 days off the bike and hopefully the knee will be ok for the weekend but if it’s not I still have some weeks off before I have to start training again.”

Michael Vink from the Mike Greer Homes team, who now holds a narrow three point lead in the elite men’s series over PKF Waterproofing Concept’s Paul Odlin after Odlin was deducted points following the last round in Nelson, goes into the weekend confident he can win the series for the second time.

“For me it’s all a dress rehearsal for the Tour of Southland that starts next Sunday,” Vink said. “I have won the gravel round of the series four times so it’s fair to say I’m confident, but the weekend is all about good legs and confidence for Southland. I’d rather not win and have good legs this weekend than win with bad legs.”

Vink thought Saturdays Harbour Sprint race would probably see a good bunch contest the final climb to the finish with some small gaps up the testing climb he thinks the top riders will complete in well under two minutes.

“I think most of the key guys will wait for the final climb, as although the route is tight and twisty, it’s not really that hard, but it is going to be great to race on those roads again.”

Sunday’s epic Cycle Surgery St Martins Hell of the South will be all about positioning, luck and good preparation with riders looking at ways to ensure they can cope with the gravel sections.

Jason Christie, who upset New Zealand’s more fancied World Tour riders to win his second national title in Napier in January, is lining up for TotalPOS Solutions while Ollie Jones is another professional returning from Europe after spending the year with Dimension Data's continental development squad after beating 9000 other riders late last year to land a contract with the Qhubeka squad after competing in the Zwift Academy’s online recruitment programme.

Fresh from riding in the Oceania Track Cycling Championships in Adelaide for the New Zealand Junior boys team Laurence Pithie is racing in Team Skoda Fruzio colours for the first time alongside team mates that includes Junior World Track champions Corbin Strong, who leads the Under 19 classification, and Bailey O’Donnell.

Dunedin’s Kees Duyvesteyn (SBS Ricoh NZ) is leading the Under 23 classification and goes into the weekend third overall and in good form while last year’s series overall and Under 23 winner Jake Marryatt (Blackmax Performance) should secure the Small Business Accounting King of the Mountain title.

Riding for Velo Project Hawkes Bay rider Kirsty McCallum is poised to win her first Calder Stewart Cycling Series women’s title going into the weekend with an 11 point lead over Ella Harris who is starting as individual so is not eligible for points, and a 21 point lead over Oceania women’s’ road race champion Sharlotte Lucas who has only raced three rounds due to commitments with her professional women’s team.

“We have a super strong team line-up for the finale and I’m ready to finish it off for Velo Project and the girls,” McCallum said. “They have all ridden amazingly the whole season which has allowed me to settle into the leader’s jersey.

“I’m really looking forward to the double-header, having two races will make it interesting with the Saturday race being so short and sharp with some decent climbs and I absolutely love the gravel aspect of the race as it leaves it pretty open as to what could happen.”

McCallum has had some good recent results in Australia’s Nationals Road Series that includes the recent Tour of Gippsland where she was fourth on a hilly time trail which saw her finish sixth  overall so thought she should be climbing well enough to pressure the likes Lucas and Kate McIlroy (Lightworkx Photography) on Saturday.

Ally Wollaston (Velo Project) has a narrow four point lead over Britney Kerr (Mike Greer Homes Women) in the battle for the Under 19 jersey while there is potential for a good battle for the Small Business Accounting Queen of the Mountain title with McIlroy and Luas only separated by three points.

Blair Martin (Cycle World Emersons) is also a nonstarter so Christchurch cyclist Glen Rewi (Christchurch Mitsubishi) could move up to second in the 35 to 44 age group and there is the potential for Justin Sims (Armitage Williams Blue) to take the series 45 to 49 lead off Rowlands if he gains a good haul of points over the weekend.

The over 50s’s classification will see a good battle between Darrel Kircher from Christchurch (Christchurch Mitsubishi) and Dunedin’s Chris Latta (Cycle World Emersons) with only seven points separating the two experienced riders.

Rowlands has the Small Business Accounting King of the Mountain classification wrapped up.