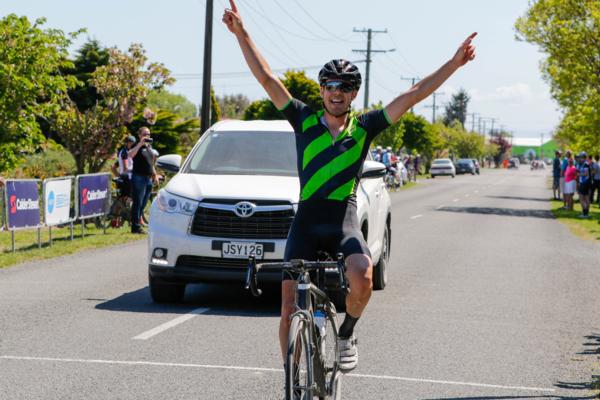 William Green upstaged all the pre-race favourites and predictions to win the series finale today the Cycle Surgery Hell of the South. CREDIT: rickoshayphotos

Green flies in and upstages favourites in Hell of the South

Vink and McCallum win Calder Stewart Cycling Series – Karton does double header – Lucas wins solo
The decision to fly in from Australia to watch his partner Kirsty McCallum try to win her first Calder Stewart women’s series title and to have a hit out before the SBS Tour of Southland proved a winning one as William Green upstaged all the pre-race favourites and predictions to win the series finale today the Cycle Surgery Hell of the South.

Held near Leeston outside of Christchurch the iconic Hell of the South gets its name from the notorious race defining gravel sections it features that the riders racing the elites men’s, women’s and masters races all tackled a number of times.

“It was an epic day out in the break for a hundred and forty kilometres today with eight gravel sectors,” Green, who is from the Hawkes Bay but now lives in Brisbane and rides in Australia’s Nationals Road Series, said.

“There were quite a few attacks early on and then the break got away after around ten kilometres. With three Skoda Fruzio riders in the break I didn't like my chances in the sprint so attacked several times before getting way solo with around fifteen kilometres to go after the last gravel sector.”

“I flew into New Zealand on Thursday and as it was my first Calder Stewart race was unsure as to how it would go. I guess I was a bit of a wild card racing for the Tineli Composite team but the win has given me some confidence ahead of my first Tour of Southland starting next week.”

It was a successful day for Green’s partner McCallum, a rider he also coaches, who did enough over the weekend to seal her first overall women's Calder Stewart Cycling Series title.

“I’m super stoked to have taken out the series,” McCallum said “I've been working hard for something like this and I have finally done it.”

“It was a clean sweep for Velo Project with excellent team results with a win today, the under 19 series leader, the overall series leader and Velo Project were the winning overall team for the series. The depth of women's racing in New Zealand is building and the Calder Stewart Cycling Series have done an incredible job with running the series.”

While Green was riding away for the glory of a fine individual win Michael Vink from the Mike Greer Homes team was focused on winning the overall series title for the second time, starting the day with one hand on the trophy after a strong win in yesterday’s explosive new 26 kilometre Harbour Hammer event from Lyttelton to Diamond Harbour, easily accounting for Corbin Strong on the tough final climb to win in thirty nine minutes and twenty three seconds.

Vink has made the Hell of the South his own in recent years but punctured in the first few kilometres of racing but after a quick wheel change was quickly back into the peloton only to then see a number of his team mates, that included a previous series winner Sam Horgan, caught up in a crash.

“It is nice to win the series after all the work my Mike Greer Homes team mates have done,” Vink said “The plan was to race for the win today but we lost four guys within the first 20 minutes of racing so I had no choice but to ride defensively, which isn't how I wanted to win it, so I’m happy to still pull it off in what was a day of terrible luck for Mike Greer Homes.”

Punctures before even reaching the gravel meant Vink was forced to stop twice, and by the time he had made it back to the bunch the days key break was gone and he had only had three team mates left in the race.

“Fortunately there was no one threatening up the road and there were enough up there to soak up all the points, which was good because even if I crashed out or punctured in the last few kilometres I would still have won the series,” Vink said.

“I was cautious of riders getting dropped from the break though and points where tight so I wanted to sprint at the end just in case, and I won the bunch sprint so there was lots of bad luck but we played the hand we were dealt and made it work.”

Dunedin’s Kees Duyvesteyn (SBS Ricoh NZ) won the Under 23 jersey after a strong consistent series and Junior World Track champion Corbin Strong (Team Skoda Fruzio) won the Under 19 jersey for the second year in a row.  Jake Marryatt (Blackmax Performance) won the series Small Business Accounting King of the Mountain title and Team Skoda Fruzio was the best team of the series.

Professional Hamish Schreurs has just returned home to Christchurch after a long season with his Professional Continental team the Israel Cycling Academy, but was keen to test out an injured knee so lined up for the Moore Stephens Markham's Canterbury development team.

“It’s been a long season and I was happy to be on the bike and felt strong but could still feel my knee buts its better so that’s good,” Schreurs said.

Schreurs finished fifteenth on Saturday and came twelfth today, happy to get through two hard days of racing and was looking forward to resting up and getting his knee right before resuming training again.

“I was stoked to win solo and have my teammate take the breakaway sprint for second place,” Lucas said.

Lucas, Ella Harris who was riding as an individual, Britney Kerr (Mike Greer Homes Women) and Wollston got away after the first gravel section and stayed away all race. Lucas attacked with ten kilometres to go quickly building a winning lead while Wollston out sprinted her breakaway companions to claim second and add to her Under 19 series lead.

“A key moment was just how technical the first gravel section was,” Lucas said. “It caught lots out and it was a tough day on the bike.”

Kate McIlroy (Lightworkx Photography) won yesterday’s Harbour Hammer in a tight finish just edging out Ella Harris and Lucas to win in forty three minutes and 56 seconds to cement her win in the Small Business Accounting Queen of the Mountain competition.

Chris Karton (Heartland Ricoh Cycling) confirmed his pre-race favouritism backing up yesterday’s impressive Harbour Hammer win, were he managed to climb with the best of the masters climbers to unleash a powerful uphill sprint to win the masters race in forty four minutes, to win today’s race in a large bunch sprint to complete a very successful weekend.

“I’m so pleased to take the win and the series today,” Karton said. “The team were outstanding all day and controlled the race perfectly so I was just glad I could finish it for them.”

Neil Cleghorn (Armstrong Prestige Dunedin) got away from the main bunch and built up a good lead until some teams got organised and started to work to pull him back in. As Cleghorn was caught on the second last gravel section Karton attacked which split the race with a group of 15 riders getting away.

Nearing the finish there were a number of attacks that saw Karton under pressure to chase as he was without team mates, but he lead out the sprint and managed to win in two hours and forty one minutes, holding off Mike White (Armstrong Prestige Dunedin) and Mike Cawford (Armitage Williams Blue).

“It was a great event and I loved the shingle,” Karton said. “I love gravel, I’m a mountain biker so it was right up my alley and its sort of why I’d come here really.”

Karton stamped his authority on the 35 to 44 age group series classification with his dominant weekend while Justin Sims (Armitage Williams Blue) took the series 45 to 49 lead off Wellington’s David Rowlands who was not racing, coming home fourth yesterday but more importantly was the first 45 to 40 rider home, then was seventh today, and the second 45 to 40 age group rider to finish.

Latta had started the weekend seven points behind Kircher but strong result in the Harbour Hammer moved him up into the leader’s jersey with a six point lead overnight. Today he finished ninth overall while Kircher was fifth, with Kircher being the first over 50s rider home and Latta finished third in the over 50s classification behind Kircher and his own over 50s team mate Paul Gough.

Rowlands won the Small Business Accounting King of the Mountain classification and his Christchurch Mitsubishi team won the teams classification.