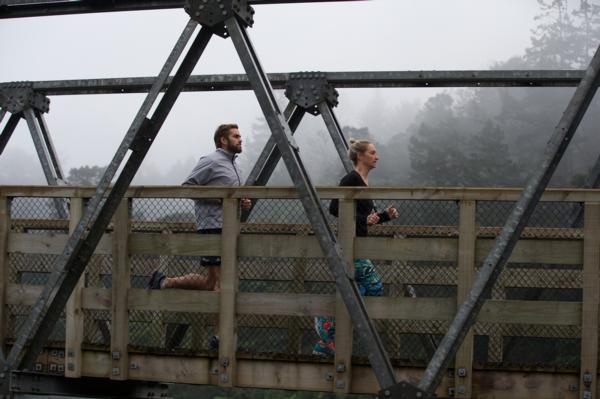 Former World Champion swimmer and Olympian Moss Burmester is taking on the massive physical challenge of the Kathmandu Coast to Coast followed by Challenge Wanaka a week later. CREDIT: ScottieTPhoto

Former World Champion swimmer and Olympian Moss Burmester is taking on the massive physical challenge of the Kathmandu Coast to Coast followed by Challenge Wanaka a week later.

Since retiring from swimming in 2010 Burmester has stayed active through spearfishing and freediving and last year got involved in multi-sport and cycling which saw him compete in February’s Coast to Coast two day event.

“I love a challenge and this is one of the key values and messages I always try to push,” Burmester said. “Challenging yourself is important I think and it doesn't mean having to win, it just means you are pushing your own boundaries and exploring what you are capable of, both physically and mentally.”

After tackling the Coast to Coast for the first time this year in a tandem team with his partner Carolyn Arthur the two-time Olympian and Commonwealth Games champion says he was quickly hooked on multi-sport and endurance events so wants to take on the ultimate test of the Coast to Coast Longest Day World Championship event following a week late by Challenge Wanaka’s 1.9 kilometre swim, 90 kilometre cycle and 21 kilometre run.

“New Zealand has the greatest most beautiful natural play ground in the world,” he said. “I have a huge appreciation for it and have always tried to encourage others to get out and explore it more and I’ve heard such great things about the stunning beauty the course in Wanaka I can’t wait to get down there to see it for myself.”

Burmester is hoping to do a good swim to set him up for the bike and cycling legs, keen to see how his body performs over two massive weekends of physical effort.

“I guess I’ll be doing the Coast to Coast knowing I have Challenge Wanaka a week later, but that’s also a motivating factor, as I’m keen to see what I can do and how the body will perform. I’m thinking the stunning location will be a motivating factor as well.”

Challenge Wanaka Race Director Bill Roxburgh was looking forward to having Burmester competing in the event.

“It will be great to have Moss racing,” Roxburgh said. “I think he’ll really enjoy the swim and probably do pretty well in that and we look forward to welcoming him to Wanaka to compete in the world’s most scenic triathlon.”

Challenge Wanaka has decided to put all its resources into the 113 kilometre Challenge Wanaka Half and the new Aquabike New Zealand National Championship race, which had its debut in Wanaka this year.

After its inaugural race this year Challenge Wanaka is also hosting a Secondary Schools event sponsored by Mitre 10 Wanaka which will kick the programme off on Thursday 14th February.