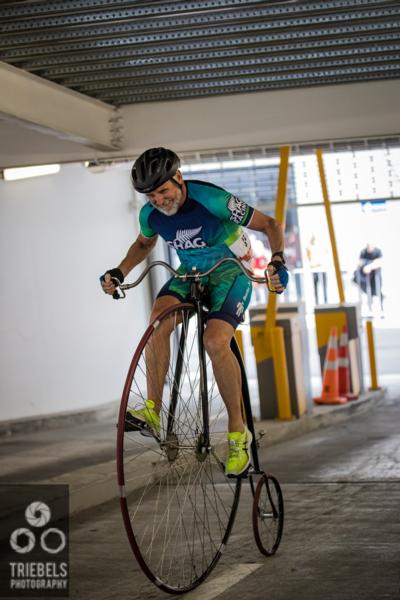 The music and legs were pumping as cyclists raced head-to-head up eight floors of a central Christchurch car building on Saturday to a party on the roof in an effort to raise awareness and funds for men’s health and Movember.

A party atmosphere prevailed at Saturdays’ Urology Associates Movember Car Park Cannon Ball with a DJ providing the soundtrack backing efforts of the riders with the fastest taking just over one minute to reach the top of the recently renamed SALT District Carpark.

“It’s such a unique and exciting combination of riders, a party, expo, great food and beverages and this year we had a popular kids zone as well. There were so many people having a great time enjoying the atmosphere and the racing while we were trying to raise awareness and funds for Movember and men’s health.”

Held for the first time last year the event featured cyclists competing in a series of rapid fire head to head races for men and women in both fixed and geared categories with a new over 45 men’s master grade.

Keen local cyclist Peter McLeod even tackled the eight stories on a penny farthing bike, impressively managing to make it to the top of the car park building in good time. “I built the bike about five years ago,” McLeod said. “I didn’t build it to sit in the shed and not get used. You got to have fun, do the best you can and make a few people smile.”

“It was another good event,” Knudsen said. “I was here last year and it’s just such a fantastic time and great cause. I’ve had a whole year to prepare for this one so it’s great. There was plenty of stiff competition so I’m stoked.”

McKenzie said the event is the only southern hemisphere round in a global series sponsored by Dutch beer brand aBLOC so to have it in Christchurch was a coup.

“The event gives cycling and Christchurch some great profile,” he said. “It was great to see so many people enjoying not only the event but being in the inner city. Events like this are great for the city’s profile, celebrate our spirit and have a fantastic feel good factor about living here.”