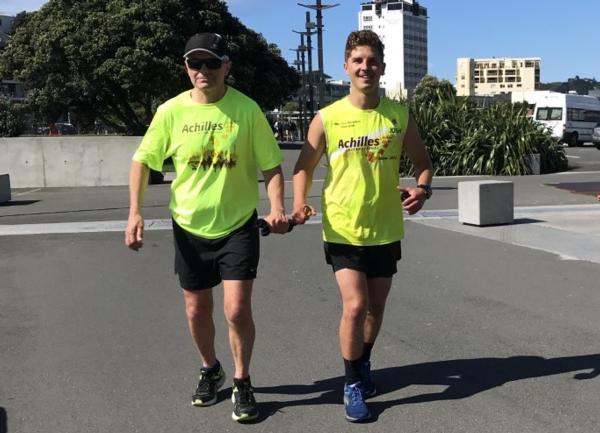 Blind athlete Dave Piper (left) gets some training in along the Wellington water front with Josh Thomas who will act as his guide as the pair compete next month's Kathmandu Coast to Coast. CREDIT: supplied

Competing in the Kathmandu Coast to Coast has been over 20 years in the making for blind Wellington athlete Dave Piper.

“Call it sibling rivalry,” he said. “My brother did the event in 1995 and it’s been something I’ve wanted to do ever since; it’s a rite of passage and something you just have to do being a Kiwi, it’s that simple.”

Piper was born with a degenerative eye disease and knew he would eventually lose his sight but it started to significantly affect his life around 20 years ago, losing any usable vision 12 years ago.

"Why should losing my sight prevent me from doing events like the Kathmandu Coast to Coast? It’s only my two eyes that don’t work, nothing else has shut down."

Piper will be accompanied by Josh Thomas as a guide throughout the event with the pair running off the start line together near Kumara on the South Island’s West Coast tethered together by an old rugby sock before jumping on a tandem bike for the first 55 kilometre cycle leg.

They will then be joined by a second guide, Olivier Lacoua from Christchurch, for the gruelling 30 kilometre mountain run over Goat Pass, which Piper says will present the biggest challenge.

“I can’t wait for the kayak on the second day, I really can’t but the run has some uncertainty around it even though I’ve done lots of river crossings, trial running and boulder hopping, every trial and mountain is different. The tarmac on a bike is generally predictable and the heading down the river in a tandem kayak I expect to be fine but all mountain runs are vastly different.”

Piper had always been an active sportsman playing football and cricket, as well as taking part in triathlons and half marathons and remains highly motivated to keep up his physical activities and events.

He has competed in the Wellington Ultra off road marathon, the Tauranga half Ironman and a number of half marathons with the support of Achilles New Zealand, an organisation that supports people with disabilities to run alongside able-bodied athletes in mainstream running events.

He is quick to add he expects 25 year old Thomas to be bitten by the Kathmandu Coast to Coast multi-sport bug. “He’s a sub three hour marathon runner and has a couple of ironman events under his belt, so it wouldn’t surprise me to see him back doing the one day event after getting a taste of it with me this year. Without him I wouldn’t be doing it so his support is pretty special.”