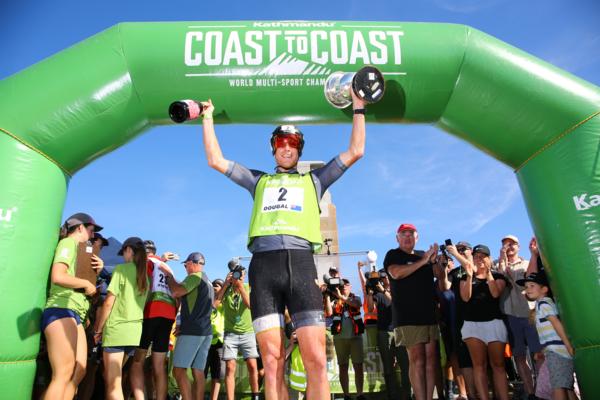 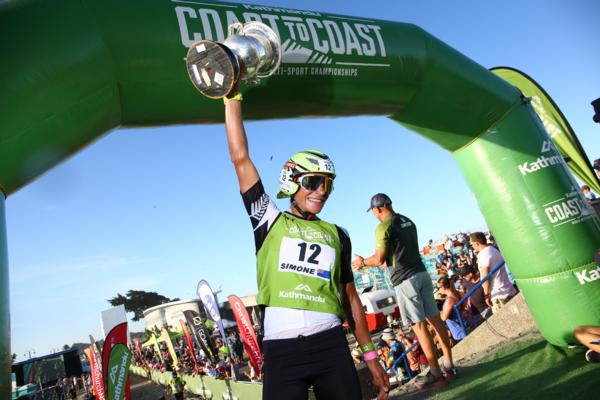 After an absence of six years Wanaka based Allan finally added his name to an impressive list of previous winners, taking the men’s title in a time of eleven hours and fifteen minutes after a fierce three way battle with Christchurch based Sam Manson and leading Australian multi-sport athlete Alex Hunt.

Dean faded early in the kayak as the three top seeds Hunt, Allan and Manson followed each other battling head to head down the river in the tightest battle the event had ever witnessed at that stage of the race.

Hunt was first to drop off the pace with Manson taking the lead with Allan quick to follow the local kayaking river guide who was expected to be the days strongest on the river. Manson had a weak moment with about 20 kilometres left to kayak that Allan was quick to take advantage of eventually coming off the river with a four minute lead heading into the final 70 kilometre cycle leg into Christchurch, storming home 15 minutes ahead of Manson who also had his best result in the race. Hunt finished third.

Surrounded by his young family 33-year-old Allan said coming back to race in his first Coast to Coast since 2013 was a chance to make amends and set an example for his kids.

"Flynn here and Matilda (Allan's daughter), they're my world," he said at the finish. "A big part of coming back was to set an example to them that you've got to reach for your goals, and success is never guaranteed, but I just wanted them to see that I had the courage to come and have a crack.”

"It's been six years since my last shot at it. I was probably guilty of fearing failure in a way. I sort of just had to get over myself and I thought the success in these sorts of things is having a crack.”

"It's really a career highlight. This race, it means a lot to me and I've been trying to win it for the best part of a decade."

The women's race was equally exciting with Christchurch based German Maier also claiming her first-time World Championship title in a time of 12 hours and 56 minutes beating four time champion Elina Ussher of Nelson by 11 minutes and Fiona Downling who came home in third two minutes behind Ussher.

Maier, who was almost lost for words on the finish line after winning the Kathmandu Coast to Coast in her third attempt, entered the mountain run in the lead and although Ussher, Fiona Dowling and Corrinne O’Donnell fought hard closing the gap at times, she was never passed by the other women.

"I don't know how I feel. I need to give it some time," she said. "I put a lot of time and effort into this event and I know it's going to be hard, and I guess there was a lot of expectation on me, a lot of pressure on myself, so to actually finally win the Coast is pretty amazing; I guess third time lucky."

Maier had to recover from crashing her bike into a van during the short cycling stage that sits between the mountain run and leads into the kayaking and was also given a two-minute penalty in transition due to a support crew member taking her bike from the rack and sitting it up on the road, something competitors must do.

Selena Metherell held on to her first day lead to win the women’s individual two day event in fourteen hours and 28 minutes, finishing 16 minutes ahead of Connie Dick.

Robert Loveridge and Tony McGuire built on the lead in the men’s two days team event to win in 12 hours and 24 minutes while the White Knights team of penny Costello and Michelle Knight  won the womens two day teams category in 15 hours and five minutes.

“I was pretty average yesterday but luckily woke up feeling a bit better and yeah, we actually had a reasonable day, didn't we," McCaw said.

"I found it hard yesterday for extra reasons but I guess it just wets your appetite. You do something like this then you go I could do this and that better, and that's what it's all about."

The pair crossed the finish line on day two with a time of fourteen hours and 49 minutes with McCaw admitting that the two-day race took a big toll on him, but said it felt good to finally finish the tough event.

"To be honest I felt just as bad walking as I did running so I was like might as well keep trying; one foot in front of the other. People say do you enjoy this stuff, and sometimes you don't, but it's actually getting to this point, standing here, and the real sense of achievement you get."