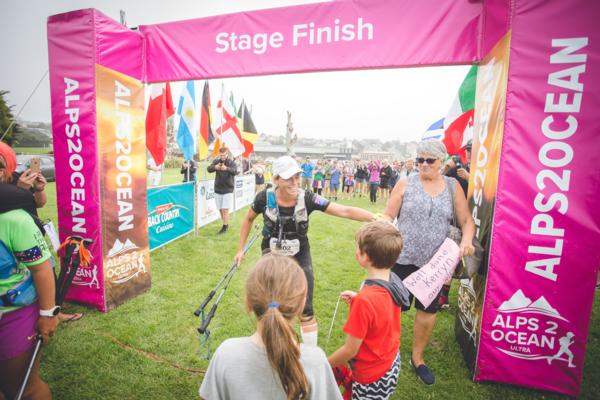 Queenstown runner Kerryn Bell was surprised to be leading her first ultra-running event last year, the Alps 2 Ocean Ultra, and looked set to win the week long stage race until injury saw her mental strength put to the test just to ensure she finished.

“To be leading was a huge surprise, I’d never thought for a moment I’d be in that position,” Bell said as she prepares to run again in this year’s event that starts on Sunday. “My goal going in to the Alp’s 2 Ocean Ultra was to give one hundred percent and finish, and that goal never changed.”

Running in the supported event Australian James Kohler and Bell were the first male and female runners to cross the finish line on the shores of Lake Ohau on the second day of last year’s Anchor Milk Otago Alps 2 Ocean Ultra, and both continued to lead until injury struck Bell on stage five of the event and she was reduced to walking to complete the event.

“Obviously the injury was disappointing when I was going so well, but we put ourselves on the line, we’re pushing boundaries and injuries and accidents can happen. It’s how you deal with those and find the positive that gets you back on the start line of the next event.”

With a young family it had been almost 10 years since Bell, a former ironman competitor and New Zealand representative in triathlon, had done any serious training or racing when she ran in last year’s event.

“I was a competitive swimmer for many years and then moved into triathlon and ironman racing in Europe, Africa and Australasia and I ran my first half marathon at six years of age but running has always been my weakest discipline and least favourite.”

But Bell cannot wait for this year’s Anchor Milk Otago Alps 2 Ocean Ultra to get underway again, quick to say she that even though she injured her achilles and had to hobble almost 100 kilometres spread over two days to get to the finish line with the aid of walking sticks last year, just fell in love with ultra-running.

“The whole experience is just amazing,” she said. “Obviously I love running but the Alps 2 Ocean is a total package; the scenery, organisation and most importantly the friendships you make. It’s always tough to get an injury whether you’re up the front or at the back of the pack.”

“Every one of us puts in time and dedication, and we all make sacrifices, financially, socially and everything else, so it’s a real shame when the body fails but you just have to fall back on some mental strength to get through and the support from everyone around you is just amazing and really is very special.”

After having two children and almost 10 years away from sport Bell turned 40 last year and needing a goal saw an advertisement for the Alps 2 Ocean Ultra and entered the next day with no idea what was involved or how she would manage to do it.

“I’d just had surgery for neuromas on both feet and was crawling around on my hands and knees unable to walk, so the Alps 2 Ocean was a good goal to get motivated and run again,” Bell said.

“I love the ease of running, you just need shorts, singlet and shoes. You can run anywhere. I love getting lost in the mountains and I’ve always been drawn to endurance events where I can test both the mind and body. I’m stubborn, and it’s a good trait for running ultras.”

With a busy home life she says her build up has been fun but the training has not been perfect. “My husband travels a lot and our families live at the opposite ends of the country. I work a full time job, the kids do 10 sport sessions a week between them and I coach my daughters touch rugby team, so life is busy.”

So training fits around the family and work with most of her training done after the kids are in bed at 8pm or if her husband is away Bell takes the kids with her.

“They either ride their bikes or if I have hill reps they stand at the top and time me, so it’s not ideal training, but I fit what I can around family and work.”

Bell took  four months off after last year’s Alps 2 Ocean to recover from the achillies injury and then built up to a 200 kilometre race. “My training for that first race back was limited, and we had a family holiday in Fiji so I did my five hour training run doing laps of the island in 40 degree heat.”

The 200 kilometre event was in the middle of winter with snow and Bell says she did it to push herself physically and mentally. “I had no idea what I was doing but managed to be the first female, was sixth overall and took two hours off the course record; I learnt a lot from the experience.”

“I’m coming in to this year’s Anchor Milk Otago Alps 2 Ocean Ultra fit strong happy and healthy, so you can’t ask for more than that.”

The Anchor Milk Otago Alps 2 Ocean Ultra starts in the shadow of Mt Cook at 7am this Sunday and finishes a week later in Oamaru in North Otago, travelling through some of New Zealand’s most spectacular alpine scenery.