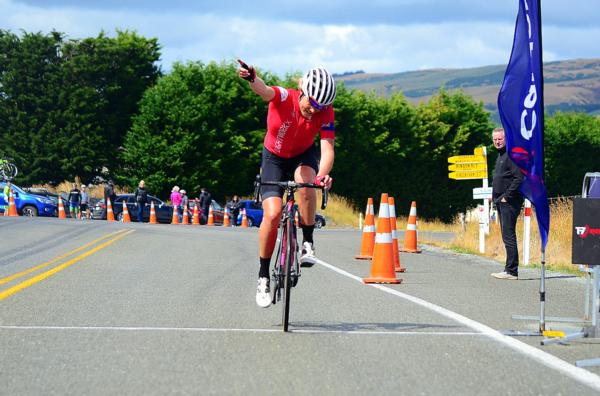 Kate McIIroy continued her run of success in Dunedin making it three winning years in a row as the Calder Stewart Cycling Series kicked off in today with the Midway Motors Dunedin Classic CREDIT: Rachel Harris

McIIroy makes it three in a row in Dunedin

Pro cyclist Kate McIIroy continued her run of success in Dunedin making it three winning years in a row as the Calder Stewart Cycling Series kicked off in today with the Midway Motors Dunedin Classic.

Riding for the Lightworkx Photography team McIIroy, who left the international triathlon circuit three years ago to focus on cycling, won the 109 kilometre women’s race in three hours and nine minutes.

“It’s really cool to get the win but it still upsets me that I was overlooked for a hilly world champs course last year, so I hope people are starting to realise I do climb hills ok,” McIIroy said. “I’m super happy to win this round for the third year in a row and it’s also a great result for the Lightworkx junior development team.”

“We were very happy to have one rider (Abigail Morton) go up the road and take the first sprint and I felt very comfortable with that. The race was controlled and felt comfortable the whole way.”

McIIroy paid tribute to her Lightworkx Photography teammate Amy Hollamby for her efforts on the front on the peloton holding the gap to leader Morton in her first race for the team, showing what an asset she will be as the series progresses.

After completing the flat circuit around Taieri and Dunedin Airport that included a number of sprint opportunities in the SBA Most Combative Rider competition Morton (CNZ Performance Hub) had a one minute lead heading into the final tough 14 kilometre climb up Lee Stream Valley.

Deborah Pain (Mike Greer Homes) was the first to show her cards on the climb with an aggressive attack quickly establishing a 30 second lead, but McIIroy remained calm.

“I have won this race two times already and knew to back off and reel her in slowly. I caught Deborah two kilometres into the climb with Henrietta Christie on my wheel and we went on to catch Abigail.”

McIIroy applied some pressure in the cross winds and broke away to ride solo ten kilometres to the finish line, while 16 year old Christie hung on to finish second just over a minute behind while Kirsty McCallum was third, 24 seconds behind her Velo Cycle Project team mate.

Younger riders dominated the race, with seven under 23 and one under 19 rider Ari Scott (Team Skoda Fruzio) in the top 10.

“I don't win a lot as I'm usually the person behind someone else's success, so the get the win is something pretty nice and gives me good confidence on my form heading into the euro season,” Batt said.

“I just relaxed for the first lap and a half after didn't try get in any moves as me and Vink (Michael) were the protected riders in our team.”

A group of 15 riders got away on the first lap of the Taieri circuit but it was shut it down pretty quickly as teams tried to split racing up in the cross winds which resulted in Batt, Richard Lawson (Moore Stephens Markhams Canterbury Development Team), Max Jones (Team Skoda Fruzio) and Keast managing to escape the main bunch.

After the first SBA Most Combative Rider sprint Batt rode off the front and was quickly joined by Lawson and the two riders worked well until they were caught three kilometres before the bottom of the climb.

“I just chilled out and let someone else set the tempo at the start but it was way too slow so I just rode away about four hundred metres into the climb and managed to stay away. The climb was perfect for me as it was a tail wind and I've been working on my climbing a bit and I knew I was capable of getting a good result; it wasn't until the last kilometre I realised I had won.”

In the men’s masters race Hilton (Cycle World Emersons) broke away with Craig Domigan (Cycle Surgery Anzco Craft Embassy) on the second lap of the circuit and then dropped Domigan as the road went up, starting the climb with a four minute lead over the main peloton, to win his first major race in two hours and fifty minutes after racing his bike for only just over one year.

“I lost around 30 seconds on the chasers but had time to celebrate,” Hilton said. In dedicating his win to his late partner Hilton said she and the rest of the team were his inspiration today.

Riding in his first race as a master after moving up from the elite men’s racing, Brett Grieve (Cycle Lab Joyride) was third just losing to Rowlands in a sprint for second over all.

The next race in the series is on the West Coast in Hokitika on Saturday 13 April.