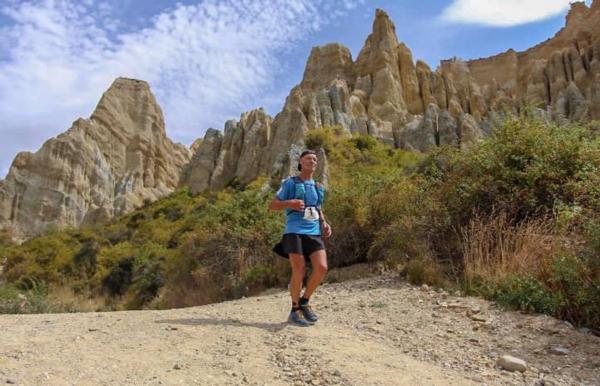 North Otago's 67 year old Eric Ross, pictured at the Clay Cliffs 70km into his 88km day, held off the leaders to be first home on the toughest stage of the Anchor Milk Otago Alps 2 Ocean CREDIT: Michael Sandri

North Otago’s 67 year old Eric Ross held off the leaders to be first home on the toughest stage of the Anchor Milk Otago Alps 2 Ocean Ultra, a gruelling 88 kilometres from the shores of Lake Ohau to Loch Laird beside the Waitaki Lakes.

Ross knows the area well having had a hand in the course design of the 323 kilometre seven stage ultra-running event, and put his local knowledge to good use holding off the event’s leaders after starting two hours earlier yesterday morning, finishing the Queen stage of the event 12 hours and four minutes later.

“We were so pleased he held off all the challenges from the super-fast guys that started at 9am yesterday morning,” one of the organisers John Crombie said. “Last year the earlier 7am starters were caught well before the halfway point so it was an amazing effort.”

The gruelling race defining 88 kilometre stage included two tough climbs of over 800 metres that as well as testing the runners provided some magnificent scenic views as runners took between just over 10 hours to more than 19 hours to complete the route.

In the closest battle in the event Emily Kratz from the United States took over the lead from Queensland runner Sarah Foster in the women’s unsupported event where runners have to carry their clothing, food and sleeping bags, completing the stage in 11 hours and 28 minutes, 17 minutes quicker than Foster.

Kratz now has a combined time of 22 hours and 40 minutes, only three minutes ahead of Foster with three days of racing left.

Men’s unsupported leader Canadian Chris Coolican pulled out with an injured hip and calf during the fourth stage that saw Seth Campbell take the lead in the unsupported category. Campbell, a former US Special Operations Ranger, takes a 46 minute lead over Tim Franklin from Australia heading into the final three stages.

Tomorrow’s stage five is a shorter punchy 45 kilometres that starts at Loch Laird and heads down the Waitaki River Valley.