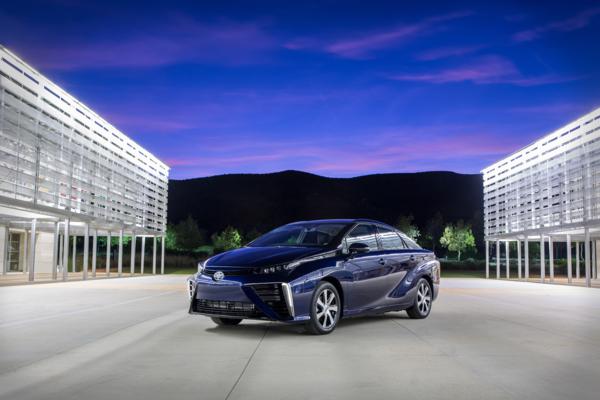 Hydrogen-fuelled vehicles will play a part in our transport future

In the move to decarbonise the world’s transport fleet, hydrogen will have a unique role to play alongside self-charging hybrids and battery electric vehicles, according to Toyota.

Episodes of extreme weather around the world and increasing average global temperatures are attesting to the reality of global warming. Amid global efforts to hold the potential temperature rise to 2.0°C or 1.5°C as the latest IPCC report recommends[1], Toyota is planning to slash average CO2 emissions per vehicle by 90% in comparison with 2010 levels, by 2050.

Toyota is taking a diversified approach to technology investment. It is investing in its own manufacturing plant and joint ventures to speed up the development and production of batteries and hydrogen fuel cells. It fully expects to be selling 30,000 FCEVs (currently 3,000) per year globally in the not too distant future.

Toyota Motor Corporation is a steering member of the Hydrogen Council which is clear about the task ahead: to achieve the two-degree scenario, the equivalent of 160 million low emission vehicles – 80 million zero emission and 80 million plug-in hybrids – will need to be on the world’s roads by 2030.

Toyota New Zealand Chief Executive Alistair Davis says, “Reaching this ambitious target will require a wide range of technologies. At Toyota, we believe that to bet on a single technology to solve the challenge of decarbonising transport is too risky. What if the hoped-for advances do not materialise or production lines fail to meet demand?”

“Technological developments tend to not take place at the expense of one another. The development of BEVs and FCEVs is likely to be synergetic: both technologies rely on electric powertrains and benefit from improvements in these components,” he says.

The Hydrogen Council estimates hydrogen will power more than 400 million cars, 15 to 20 million trucks and around 5 million buses by 2050, which constitute on average 20 to 25% of their respective transportation segments.

Since hydrogen plays a strong role in heavier and long-range segments, that 20 to 25% share of the total fleet could contribute more than one-third of total CO2 abatement required for the road transportation sector in the two-degree scenario.

“Hydrogen is an indispensable resource to achieve the much-needed transition to low carbon energy use as it can be used to store and transport renewable energy to power transportation. The sooner we get the hydrogen economy going, the better,” Mr Davis says.

Toyota has a range of hydrogen powered vehicles already for sale in selected markets. Sales began in 2018 of the Toyota Sora FCEV bus and Toyota expects to introduce 100 Sora buses within the Tokyo metropolitan area ahead of the Olympic and Paralympic Games in Tokyo 2020.

The medium-sized FCEV Toyota Mirai car has been available in several markets, including Scandinavia, Canada and California, since 2014 and FCEV forklifts are in commercial use in Japan and the USA. The next five years will see the introduction of more FCEV models in medium-sized and large cars, buses, trucks, vans and trains.

FCEVs are best suited for applications with long-range requirements, heavier payloads and a high need for flexibility. Decarbonising these segments is particularly important as they consume a large share of total energy – while trucks and buses would account for only 5% of all FCEVs by 2050, they could, according to the Hydrogen Council, achieve more than 30% of hydrogen’s total CO2 abatement potential in the transport sector.

If the forecast numbers are realised, FCEVs would have lower investment costs than BEVs in long-range segments, with much shorter refuelling times and more efficient payloads. With renewable and clean hydrogen, FCEVs emit very little CO2 and require less resources and energy in the manufacturing process than BEVs.

Toyota New Zealand is an active member of the NZ Hydrogen Association, the Climate Leaders Coalition and the Sustainable Business Council.