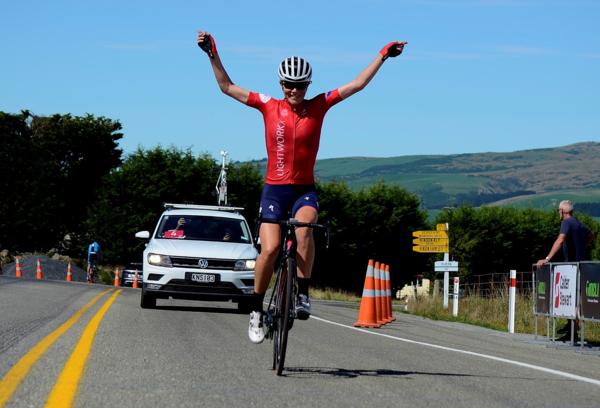 Calder Stewart Cycling Series women's leader Kate McIlroy is hoping to add to her lead as racing gets underway again in Nelson on Saturday after a winter break. CREDIT: rickoshayphotos

Newly crowned cyclocross national champions Kate McIlroy and Campbell Pithie will be hoping that recent form crosses over to the road when the Calder Stewart Cycling Series get underway again in Nelson on Saturday for round four.

McIlroy, a New Zealand Commonwealth and Olympic representative across athletics, triathlon and cycling, won the combined women’s race at the Cyclocross National Championships in Christchurch last month while Pithie picked up the under 23 title.

Riding for the Lightworkx Development team McIlroy, who says she has been “mixing it up a bit” since the last round of the Calder Stewart Cycling Series on the West Coast in April, will wear the women’s series leaders jersey carrying a 16 point lead over the leading under 19 rider Henrietta Christie (Velo Project) who is only one point ahead of her teammate Kirsty McCallum.

“I’m looking forward to the racing and we’ll use the team as well as we can hoping to come away from the weekend still in the leader’s jersey,” McIlroy said.

“It’s a different course than last year and it sounds like a strength course and although it’s a smaller women’s field, it’s still a strong one with lots of punchy riders.”

Fresh from winning the 119 year old 150 kilometre Twizel to Timaru Cycling Classic at her first attempt recently, a result McIlroy says she is “especially proud of” the 38 year old from Wellington knows she has the form to defend her series lead this weekend.

Her team mates include well performed triathlete Kiri Atkin who spent the New Zealand summer racing in Europe that included competing in the under 23 world triathlon championships, strong master’s rider Amy Hollamby and Rebecca Kingsford who returns to the series for the first time since being hit by a car last year.

The Velo Project Women’s Cycling Team tasted international success in Asia during the New Zealand winter and with Elyse Fraser who has recently returned from racing in Europe, and Ally Wollaston who won the Individual Pursuit at the Junior Track Cycling World Championships last month, both lining up on Saturday they could make life tough for McIlroy in the women’s race.

Another rider sure to make her presence felt is Georgia Christie, who provided an upset win in road race at cycling nationals in Napier in January; she leads a small Mike Greer Homes team of three.

Velo Project goes into the weekend with a four point lead over Mike Greer Homes in the women’s teams’ classification while McIlroy also leads the Small Business Accounting Most Combative Rider competition.

Marryatt, who won the overall elite men’s and under 23 series title two years ago, said he was feeling strong and was looking forward to the series getting underway again after the winter break.

“The course is a bit of an unknown,” he said. “But I’m ready for it and will be watching all the main contenders. I want to finish the weekend still in the leader’s jersey, that’s the goal.”

Dunedin cyclist Kees Duyvesteyn who leads the under 23 classification lies only two points behind Marryatt, and after returning to New Zealand after a strong season in the Unites States and Europe where he collected several wins in Belgium he won last month’s Timaru Cycling Tour.

There is a chance the under 19 jersey may change hands as Logan Currie (Transport Engineering Velo South) is overseas in the UK competing in the World Road Championships. The best placed rider racing on Saturday is Keegan Hornblow (Moore Stephens Markhams) who would need to finish in the top six on Saturday to claim the young riders jersey.

The lead in the Small Business Accounting Most Combative Rider elite men’s competition is set for a shake up with leader Laurence Pithie absent.

All three men’s masters’ leaders Brett Grieve (Cycle Lab Joyride), David Rowlands and his Christchurch Mitsubishi team mate Stu Lowe, have a lot to race for to try to consolidate their leads.

In the 35 to 44 age group Grieve holds a 22 point lead over Chris Karton (Willbike Cycling Team) with Andy Hilton (Cycle World Emersons) only one point adrift of Karton while Rowlands has a 20 point lead over Neil Cleghorn (H R Building) in the 45 to 49 age group classification.

Things are tighter at the top in the over 50 age group with Lowe only holding a five point lead over Chris Harvey (Cycle Lab Joyride) who is just three points clear of Paul Gough (Cycle World Emersons).

Things are close in the hunt for the series masters team’s classification with Cycle Lab Joyride holding a narrow two point lead over Christchurch Mitsubishi.