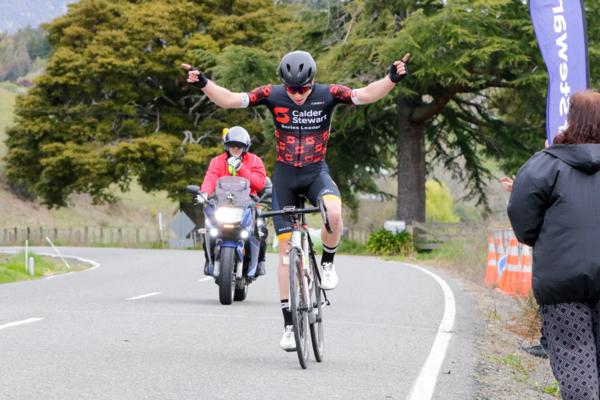 1) Dunedin cyclist Kees Duyvesteyn had an impressive elite men's win to move into the series lead and claim three leaders jerseys in round four of the Calder Stewart Cyc.ling Series in Nelson CREDIT: rickoshayphotos

Dunedin cyclist Kees Duyvesteyn had an impressive elite men’s win to move into the series lead while Kate McIlroy and Amy Hollamby combined to ride away from the women’s field as Calder Stewart Cycling Series got underway again in Nelson today.

After a break for winter round four of the South Island cycling series was held on a tough circuit south of Wakefield near Nelson with the elite men and under 23 riders tackling 162 kilometres while the women and masters raced 104 kilometres.

Riders had to contend with strong head winds that saw lots of early splits and attacks as teams fought to control the bunches across the three races.

Sam Guest (BlackMax), Richard Lawson (Moore Stephens Markhams) and Hamish Keast (Transport Engineering Velo South) eventually got away in the elite men’s race and worked well to build a lead that was eight minutes after 100 kilometres of racing.

Duyvesteyn (SBS Ricoh NZ) lead the chase, showing the form and strength from a successful winter racing in Europe and the United States, taking six riders across the gap to catch the leaders in the closing stages before breaking away solo over the final few kilometres to win.

Logan Currie (Transport Engineering Velo South) stays in the Under 19 leader’s jersey even though he didn’t race as he is overseas in the UK competing in the World Road Championships.

McIlroy (Lightworkx Development) said her day was “awesome” on what was possibly the hardest course she said she has ridden.

“The race plan was to race aggressively from the start proving that age doesn’t determine skill on a bike,” the 38 year old said. “Amy attacked, I then bridged across on the first climb five kilometres in. We then dropped everyone and we did a two up time trial to take the overall leaders points further away from any other teams and move Amy up.”

The newly crowned cyclocross national champion and New Zealand Commonwealth and Olympic representative across three sports said her Lightworkx Development team were all very clear on the plan going into today’s women’s race, so it was “pretty cool it came to fruition.”

With a clear goal of protecting the leader’s jersey 40 year old Hollamby let McIlroy roll over the line to cap off a strong day for two of the oldest riders in the field that also saw McIlroy build on her lead in the Small Business Accounting Most Combative Rider competition.

Henrietta Christie (Velo Project) was third ahead of her team mate Elyse Fraser, the pair finishing 10 minutes after McIlroy and Hollamby, and four minutes ahead of the rest of the women’s field.

After a slow start due to the head winds that saw a number of splits in the masters men’s field, it all came back together for the combative sprint points at 31 kilometres that saw an Craig Domigan’s Cycle Surgery Anzco Craft Embassy team try to set him up to build on his lead in the combative competition.

Rowlands managed to sneak through on the inside to claim the points and not long after this effort Christchurch Mitsubishi teammates Nathan Hood and Darrell Kircher and Ben Hillary (Armitage Williams) and McDonnell escaped eventually building a three minute lead at the front of the masters race.

Rowlands was happy to watch from the main peloton until he attacked at the bottom of Kerrs Hill Road, with Grieve and then Crawford managing to follow to make it a strong group of three. They held nothing back on the descent reaching speeds of over 90 kilometres per hour, catching the leaders in the valley before the next climb.

Crawford applied the pressure with Rowlands, McDonnell and Grieve the only riders able to follow that saw Rowlands claim more combative points and then taking the sprint to claim the overall win.

“I was pleased to get the result and ride well as I have been sick for two weeks,” Rowlands said. “But credit to team Mitsubishi boys Darrell, Stu, Nathan and Steve for playing the cards right and also getting rewarded with teams win.”

Kircher was the first over 50 rider home winning a second bunch sprint containing six riders to finish fifth overall while Grieve’s second place built on his 35 to 44 classification lead.

The series now moves to Canterbury, near Christchurch for the final two rounds on Saturday the 19th and Sunday 20th of October. Sunday’s race is the iconic Hell of the South that features a number of gravel sections.