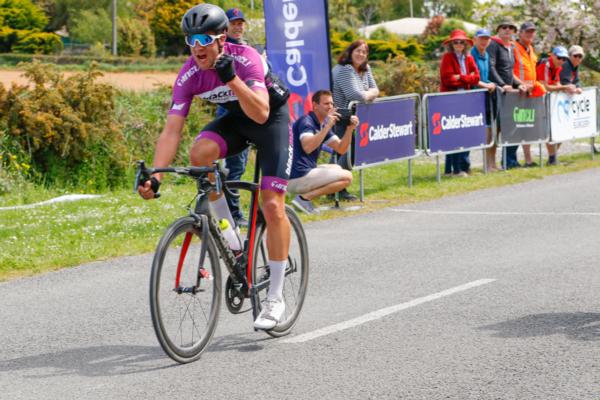 Dunedin based university student Duyvesteyn (SBS Ricoh NZ) went into the weekend as the man to watch in the elite men’s racing after a dominating win in round four of the series in Nelson late last month and riding through the entire field to comfortably win and record the day’s fastest time in Cycling Otago’s Kelvin Hastie Memorial Handicap race last Saturday.

He raced well picking up valuable points and finishing fourth behind winner Ben Oliver (Central Benchmakers Willbike) in yesterday’s fast and furious Calder Stewart Ladbrooks Kermesse and then survived a crash in today’s iconic Cycle Surgery St Martins Hell of the South to take the series’ elite and Under 23 jerseys home.

“The key moment for me was securing fourth in the kermesse and getting combative points over the weekend,” Duyvesteyn said.

“I’m really stoked to take out the series. I didn’t think I would ever manage it when I did my first series race four years ago.”

Duyvesteyn thinks his form is looking good for the SBS Tour of Southland that starts early next month, so long as he recovers ok from a crash in today’s race that saw Sam Guest (Black Max Nutrition) bag the biggest result of his career storming home to beat Paul Wright (Central Benchmakers Willbike) a sprint to win in three hours and twenty nine minutes.

“The crash wasn’t too bad,” he said. “It looked worse than it was and happened about halfway round the third lap. Luckily I had a team mate who gave me his bike to finish on.”

Women’s series leader Kate McIlroy was absent due to work commitments and her Lightworkx Development teammate Amy Hollamby who was lying second was ill, resulted in her not racing today and losing her chance to ride for the series title.

Hollamby, who had been in Bali last week for a work related conference, felt “like death” in yesterday’s race won by Hannah Bayard (Lightworkx Development) with a heart rate that that was very high even when she wasn’t exerting herself, so opted not to race today to get her health checked out.

With a serious chance of overall series success Velo Project women’s team Manager Andrew Williams was very pleased with the way Christie and the team rode. “It’s a great result for the team and Henritta,” he said.

“As a team we’ve worked really hard together through the series to help put Henritta in the position she was in, so it was great to see her and the team deliver today.”

Christie won the bunch sprint to claim third and claim the overall series to add to her Under 19 series jersey, coming home five minutes after Bauer.

McIlroy held onto her the Small Business Accounting Most Combative series jersey while Velo project was the women’s series winning team.

The first two laps of racing today in the men’s elite race were intense as teams and riders battled for position entering each gravel section and it took 80 kilometres for a break to finally get away.

As riders fought to complete four laps of the gruelling 36 kilometre circuit the key moment came on the last lap when the peloton was strung out in the gutter as the wind started to become more of a factor.

“The main bunch split apart with groups all over the road like a real classics special, the unpredictability is what makes this race so great,” the day’s elite men’s winner Guest said.

A group of 10 riders worked well together to chase down the break so the front group was all back together heading into the first gravel section on the last lap. Attacks kept coming and Guest found himself off the front in the decisive move with Wright and Ari Scott (Team Skoda Fruzio) with five kilometres to the last gravel section.

“Coming into the last gravel section we heard the gap back to the group of other favourites was about one minute and began to realise we were racing for the win,” he said. “We put in a big effort on the gravel which saw Ari just off the back and then it ended up in a two up sprint at the line.”

Guest said he feels he’s been finding some good form recently but this is his first big win serving as a good confidence booster heading into the Tour of Southland. “This race serves as a great tune up for all the guys racing down south and today proved no exception.”

The series Under 19 jersey was won by Scott while the Small Business Accounting Most Combative series winner was Duyvesteyn. The overall series winner elite men’s team was Transport Engineering Velo South.

Lowe did enough to hold onto his lead as did 35 to 44 leader Brett Grieve (Cycle Lab Joyride) while Justin Sims (Armitage Williams Racing) picked up enough points over the two days to move ahead of David Rowlands (Christchurch Mitsubishi) who wasn’t racing in the masters men’s 45 to 49 age group classification.

The masters 108 kilometre Hell of the South was won overall by Hood in a time of two hours and 43 minutes, beating his breakaway companions Grieve and Michael Crawford (Armitage Williams Racing).

Craig Domigan focused on the sprint points to claim back the masters Small Business Accounting Most Combative Rider jersey he wore earlier in the year while Christchurch Mitsubishi won the master’s men’s team classification.

Not wanting to see the Calder Stewart Cycling series disappear from the South Island will see current co-owner Richard Scott look to continue to run it without his Revolution Events business partner Jake Rowse.

“It would be a great loss for all riders, but especially our young riders who are our future if it didn’t continue,” Scott said.

He is considering an option of a five or six race series from March to May next year that could include two double header weekends with the final round being the epic Hell of the South on a modified course.

The main change he is considering will see one event per round that will see the elite men, master’s men and women all ride together in one race, as it was until 2014. Leader jerseys for masters and women would be contested along with the elite jerseys.

Scott hopes to confirm the 2020 series and dates at the end of November.