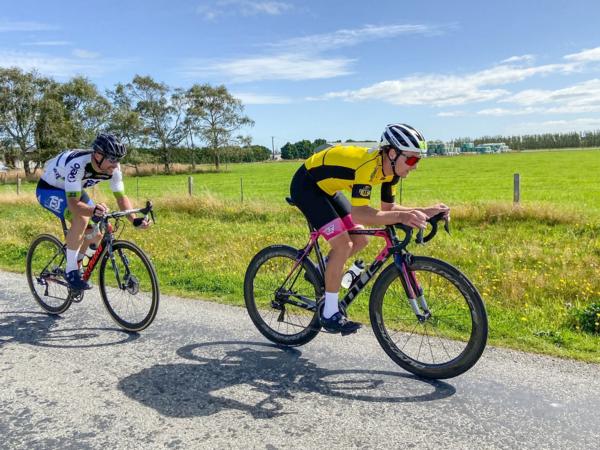 Southlanders Matt Zenovich and Fraser Hewett in last month's Vital Signs Fight for Yellow two day tour that included racing over the route that will be used for the opening round of Calder Stewart Cycling Series near Wyndham, eastern Southland, on Sunday CREDIT: Cycling Southland

Southland’s rich cycling history gets a further boast with New Zealand’s leading team based cycling series being held in the region for the first time.

The opening round of the Calder Stewart Cycling Series, the Wensleys Cycles Southland Classic, is being held in Wyndham, eastern Southland, this Sunday featuring the country’s best domestic based cyclists across elite, masters and women’s events.

“Southland had made it clear for a while they wanted a round of series so it’s great we are finally heading south,” Richard Scott from Revolution Events said.

“There is so much cycling history in Southland so I’m looking forward to the Calder Stewart Cycling Series adding to the mix. We have worked hard with the locals to make it happen and they are very passionate and enthusiastic about being part of the series and holding this year’s opening round.”

Southland masters cyclist Steve Keast said that it will be a “special moment” when racing kicked off on Sunday after being in discussions with the series owners Revolutions Events for three years.

“We really wanted to bring the series to Southland to show it off to riders and to further boast our local cycling scene,” he said.

“It’s the flagship one day teams racing series in New Zealand and it’s a real stepping stone for young riders wanting to take the next step up to events like the Tour of Southland. There’s been no shortage of volunteers willing to help as we’ve got such a strong cycling community. ”

Keast said the route provided “a bit of something for everybody” and with it heading close to the coast should also provide some of the infamous Southland cross winds to add another challenge.

“The route includes parts of a classic, historic old Southland course with false flats and power climbs and riders will be exposed to the elements so positioning will be critical, but regrettably the weather’s looking quite settled for Sunday,” he said.

“I think it’s great having the series finally head south to one of New Zealand’s strongest cycling regions,” he said.

“I’m still deciding whether or not to race due to the injury I have been fighting since the Sun Tour in early February. My role this year in the NZ Cycling Project team will be to help the younger riders chase a result in the series so it will be good to help out where I can.”

Jones, who was a New Zealand inline skating representative before turning his attentions to road cycling, rode with the Dimension Data professional development team in 2018 after winning the worldwide Zwift Academy online competition.

The 23 year Canterbury University student, who had a strong elite national’s road race last month in Cambridge finishing fifth just over a minute behind the winner Shane Archbold and his fellow World Tour professional George Bennett who was second, will have the added challenge of only having one team mate Hamish Sadler as support on Sunday.

The masters racing with three age group classifications includes the first Kiwi rider to win a stage in the Tour de France, Chris Jenner, who was part of his Credit Agricole win in the team time trial at the Tour in 2001.

Jenner, who retired from pro cycling in 2004 and moved from France to New Caledonia with his wife and young family, still pops up at the odd cycle race and has been involved with New Caledonia's cycling development squad.

The elite men race 141 kilometres while the masters will cover 101 kilometres. There are SBA Combative Points up for grabs during laps of the circuit near Wyndham.

The series has introduced a new tighter format this year with the five South Island events being held between this Sunday and the iconic Hell of the South near Christchurch on the 10th of May.