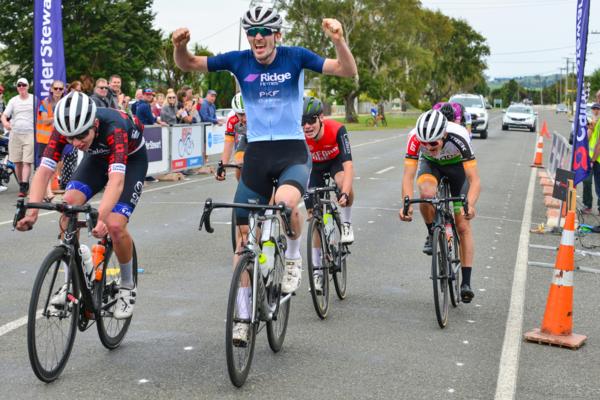 In the masters race Grieve (Cycle Lab Joyride) got away from his breakaway companions Cycleworld Emersons teammates Andy Hilton and Stu Crook with nine kilometres of the 101 kilometre masters race left and held off the chasing peloton to win in two hours and thirty two minutes.

Jones had shown good form in last month’s Vantage Elite & U23 Road National Championship in Cambridge where he finished fifth just over a minute behind the winner Shane Archbold and his fellow World Tour professional George Bennett who was second.

The group worked well to establish and hold its lead until Jones put the pressure on up a climb with 55 kilometres left, and the group of 14 became eight. The breakaway got back to work until Jones, Pithie and Currie all threw in attacks only to be reeled back in.

The closing kilometres saw a jostling for position with the group’s best sprinter O’Donnell having to do a quick bike change with teammate Bidwell with five kilometres left, leaving him to chase back through the vehicle convoy just failing to regain contact with the leaders.

“Bailey has got the better of me a few times in recent races and is usually faster than me so I knew I was probably the second favourite in the group but once he had to do the bike change I backed myself so I’m pretty happy with the win,” Jones said.

“It worked out perfectly with my team mate Hamish. I said going into the race we just had to stick together as there was only two of us and he attacked at the finish with 600 metres to go which forced everyone to go early and gave me the perfect run at other wheels setting me up well to go for the win.”

Jones claimed the elite men’s leaders’ jersey while Pithie and Price won the Under 23 and Under 19 jerseys.

The masters race saw a series of attacks in the first half of racing not come to much until the halfway point that saw Hilton ride off the front of the peloton with Grieve attached to his wheel, the pair successfully bridging across to Crooks who was 10 seconds up the road.

“Once we were all together off the front we just rode and worked hard,” Grieve, who is in his second year of riding in the series as a master after a number of years racing in the elite ranks, said.

“With about nine kilometres to go I just went full gas up a short power climb and got a gap and then although I was dying and cramping at times, just rode and held it to the line. We rode well as a team which meant I could conserve energy early on so it was just a great day on the bike.”

The only woman in today’s race Emily Paterson rode well in the master’s race until finding herself alone, finishing in a time in two hours and 50 minutes.