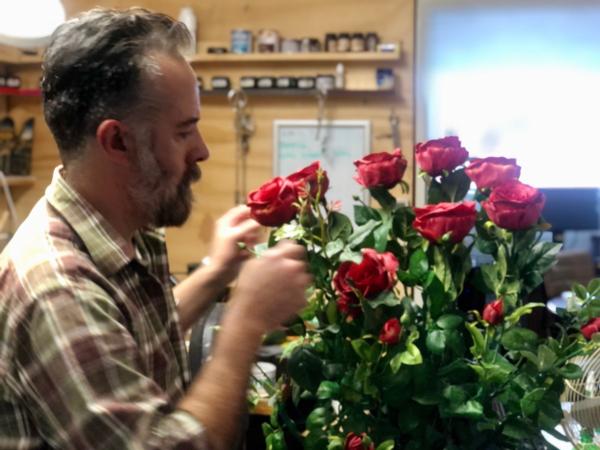 The Court Theatre's Properties Manager Julian Southgate has been working hard to produce lifelike, stunning, red roses that play a vital role in Things I know to be True that opens at The Court Theatre on Saturday CREDIT: Court Theatre

The allure of roses is universal and is not just restricted to gardens, gardeners and special occasions.

This queen of flowers that has played a part in religion, art, poetry, literature, music, fashion and design, is set to play an important role in Things I know to be True, opening at The Court Theatre on Saturday night.

The play, which follows the Price family and a range of life events that shake them to their core, takes place over the course of a year. The roses represent the various seasons, which has seen The Court Theatre’s Properties Manager Julian Southgate working hard to produce lifelike, stunning, creations.

“I’ve spent lots of time researching and studying roses,” he said. “They all have their own story and history. The set for Things I Know to be True features a suburban garden of the family home with the roses playing a vital supporting role.”

“Other productions of the play featured white roses but the Director for our play (Shane Bosher) chose red roses, as they symbolize courage and sacrifice as well as eternal love.”

From his research, Southgate identified four key varieties of roses that link strongly to key themes in the play, Deep Secret, Eroica, Papa Meilland and Europeana.

“When you see the play, and if you know a thing or two about roses, you will understand why I’ve named them after these key varieties. The roses really play a subtle, and sometimes not too subtle, role, and I’m looking forward to seeing them go through their paces when the play opens.”

Things I Know to be True is the second Andrew Bovell play to grace the stage at The Court Theatre in recent years after the award-winning When the Rain Stops Falling won over audiences in 2014 with what was described as a beautiful, sophisticated and devastating play.

Opening on Saturday night Things I know to Be True runs until 17 April 2021.