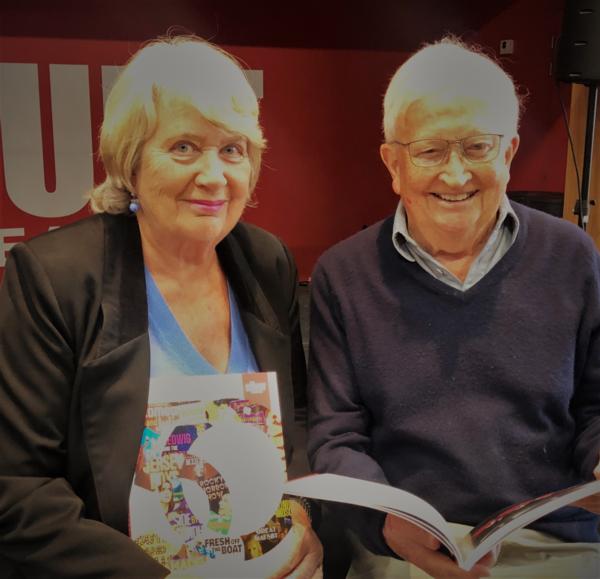 Felicity Price and Derek Hargreaves have written The History of the Court Theatre, celebrating 50 years 1971 -2021, that is being officially launched on Friday at an Alumni Event as part of the theatre's 50th celebrations CREDIT: Court Theatre

Over the last 50 years there was almost as much drama behind the scenes as onstage at Christchurch's Court Theatre.

These revelations come in a new book, The History of the Court Theatre, celebrating 50 years 1971 -2021, that is being officially launched on Friday at an Alumni Event as part of the theatre’s 50th celebrations.

“His tenure, starting just after its inception and covering almost the entire existence of The Court, was remarkable, especially since much of the work was pro bono.” she says.

“His inside info was legendary. People would often say he knew more than anyone about the theatre, its people and its secrets. It was a story crying out to be told.”

Some of the drama at The Court was due to former Artistic Director Elric Hooper’s dramatic personality, who was “a hard taskmaster in his own words, trying to get the best out of his cast and crew” which resulted in brilliant productions.

“Hargreaves’ minutes and diary notes provided immense detail of often stormy AGMs as boards went in and out of committee to discuss difficult staffing and other issues, with some of the controversy leaked to media creating a public ruckus,” she says.

“Many of the dramas involved a fight for seats on the Court board, especially in the 1980s/90s. Supporters of particular board members would turn up in droves to make sure they got on, resulting in some good people, even the chair in one instance, being unceremoniously dumped.”

Price is quick to emphasise that many people perceive a company history as being a little boring, but stresses The Court’s history definitely is not.

“There are stories that have never before been revealed. It also covers how the theatre was under threat of closure more than once; it makes for some very compelling reading.”

“I hope many will enjoy reading our story, the story of the country’s biggest, best, longest running and most popular professional theatre, of its people, its dramas, and above all, of its success,” Price says.

Over its 50 year history The Court Theatre has overcame many significant odds and survived, coming through earthquakes, terrorism, a pandemic and frequent other difficulties while remaining New Zealand’s leading professional theatre.

In her preface for the book, Christchurch Mayor Lianne Dalziel wrote: “In 2011 everything changed with the February 22nd earthquake.  The company was left without a venue and the means to produce its shows. The Court faced this challenge head on, harnessing local and national support to fundraise the approximately $5 million required to build The Shed as it is affectionately known. The Shed was built on time and on budget in just 17 weeks and was opened in December 2011, just ten months after the earthquake.

“The new venue has proved to be immensely popular with audiences (though tough on staff and performers) but nearly ten years on, The Court is planning its move back into the heart of the city to its own purpose-built theatre.”

In his foreword for the book New Zealand's most successful playwright Sir Roger Hall says “The Court was founded in 1971, that giddy era when professional theatres were opening up all over the country for the first time. . . Yet from that era, The Court is the only one to survive.

“It’s worth considering why this is so. My theory is that its programme was varied, its standards were always high and, in particular, The Court knew what its audiences wanted.”

Celebrations to mark 50 years of theatre life at The Court kick off on Friday with the Alumni Event, “Yarns & Lies”, followed on Saturday night with a Theatrical Fundraising Gala featuring some of New Zealand’s most talented entertainers.