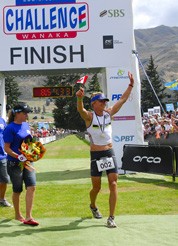 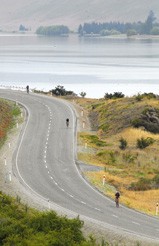 Pschebezin overhauled a more than seven-minute lead held by Australia’s Chris McDonald with just 12km left to run to move to the front while the tenacious McDonald held on to finish second in 8:49:37 less than two minutes in arrears.

The race opened with a 3.8km swim in Lake Wanaka, then transitioned to a 180km cycle through the rolling terrain of the Southern Lakes region before closing out with a 42.2km, twolap run that includes some 21km on trails along the Clutha River.

After the first lap of the run Pschebezin, a seven time winner of the mountainous Inferno Triathlon in Switzerland, had halved his deficit to McDonald and had begun to entertain thoughts of the win. Known for his closing run speed, Pschebezin posted a scorching 2:48 run to seal his win.

“I really pushed it very hard to close the gap,” he said. “I knew Chris was a pretty good runner. I just gave everything on the uphill section.” “It’s not an easy course,” Pschebezin continued. “You have to push it and keep pedaling all the time. You can’t really relax on the course. The scenery was just gorgeous.”

McDonald, winner of last year’s Ironman Louisville in the US, is known as a tough cyclist and had moved to the front by 15km on his way to a record-breaking 4:59 bike ride. As he made his way around the course the gap had grown to 5:45 to the defending champion, Dragstra, with Williams another minute back and Pschebezin 7:30 back.

McDonald, who in December was eighth at Ironman Western Australia, said he was glad to have a hard hitout and was pleased with second on the day.

“I came here for a solid hitout,” he said. “It’s tough but it’s beautiful.”

Ferguson, who started racing long course only last year at Ironman New Zealand, took second at Ironman Western Australia in December after scoring her first Ironman win at Ironman Wisconsin in the US.

“It’s the second time I’ve led from start to finish and that’s the toughest position to be in,” she said. “You have no idea what ‘s happening behind you. You don’t know if they’re catching or gaining. I was pleased with my focus all day.”

Ferguson, who is aiming at Ironman New Zealand in March, said she had entered the race in Wanaka with no taper. “It’s the first time I haven’t tapered for an Ironman and I wasn’t sure how I’d go,” she said, “but it seemed to suit me quite well.”

“I like it tough,” Ferguson said of the course’s reputation for challenging conditions. “I really
enjoyed the run. I like the off-road stuff. I do all my training off road.”

Biscay came into the race on limited training as she’d had elbow surgery in December but
said she enjoyed the day and met her goal. “I just did what I could on the bike,” she said. “My
coach told me to not really kill myself. I think I was pretty conservative. I just tried to be tough
and keep going.”

More than 100 individual competitors and more than 70 three-person teams took on the challenge of the triathlon with competitors ranging in age from 14 to 80.

Challenge Wanaka is part of the global TEAMChallenge series that includes events in Germany, France and Spain.