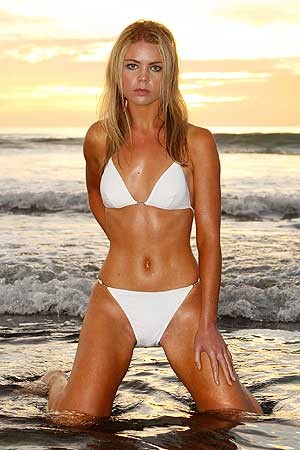 ‘It’s the usual story of pulling down someone because of her looks or her success,’ he says. ‘I believe she’s been singled out.

‘Journalistically, Miss Grant’s interview was no different in quality to others that have appeared on the Massey site.’

Miss Grant gave an interview to her Alma Mater, Massey University. The Association’s national president Assoc Prof Maureen Montgomery called the article ‘one of the most banal news features emanating from a university this year’, and that it read ‘like the formulaic sort of thing that beauty queens are expected to say when interviewed on the catwalk’, according to a New Zealand Press Association article.

‘I laugh when people assume that pageant contestants answer easy questions, showing that they are so very ignorant of the interview process or even basic inquiry.

‘Formulaic answers are rejected,’ he claims, ‘and they are certainly not expected.’

Mr Yan recalls that questions in the 2008 pageant, held two weeks ago in Auckland, concerned everything from immigration policy and globalization to the debate on genetics versus socialization.

‘They are not bimbos and they are not judged by morons. We don’t prejudge these young women as harshly as the Association has. I expected that someone of Dr Montgomery’s qualifications would make a simple academic inquiry into the process before attacking it.’

Mr Yan says that he has guest-lectured at various universities and contributed to academic journals in Great Britain, and that his fellow judges are well qualified in their areas of expertise.

‘We can’t afford to send someone to Miss Universe who cannot think on her feet or produces insubstantial answers.

‘For anyone to suggest that unintelligent women enter pageants is an affront to the contestants.’

He admits that he has only read the criticisms as reported in the NZPA piece as run in The New Zealand Herald and that he does not have the full text.

‘Based on the Herald article, the message that the Association is sending is that young men and women who have good looks should not be fêted for their accomplishments, which they worked hard for.’

He says he does not deny evidence that suggests looks can contribute to one’s career but points out that on the flip side, people like Miss Grant have to contend with being stereotyped as vacuous.

‘Miss Grant is an able, bilingual young woman with a science degree, running a nutrition business with a growing number of contracts,’ he says.

Mr Yan believes that Massey University should be proud to have such talent and entrepreneurship among its alumni.

He acknowledges that beauty pageant entrants run the risk of objectification but he did not think this was an example.

A photo of Miss Grant in a bikini was removed by Massey University in favour of a more conservative shot.

‘I can understand complaints about the earlier photograph, but after it was changed, it still seems that the Association can’t let the matter go,’ says Mr Yan.

‘While I cannot speak for Massey University, I know earlier versions of web pages can go live, and I imagine what we see now is the final one.

‘To me, this was a non-issue sparked by a single image, and the Association is now grasping at whatever is left of the article to cement its self-importance and to belittle Miss Grant’s academic endeavours. That, to me, devalues the degree of any New Zealand university graduate.’