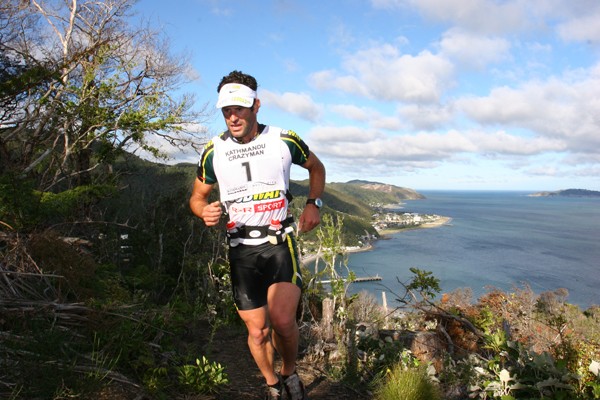 Ussher too good in Crazyman

For Ussher it was a return to the scene of his first big win. The multi-time world champion kick-started his multisport and adventure racing career with a win in the Crazyman back in 2000. Nowadays the born and bred Wellingtonian calls Nelson home, but he returned again this year to win the annual event for the third year in a row.

With an impressive “catch-me-if-you-can” performance, Ussher left a quality line up that included former worlds title runner-up Neil Gellatly and up and top Aussie Jarad Kohlar wondering what they have to do to beat the world number one. The 31 year old took no prisoners from the start, a testing 12k kayak leg into the teeth of a southerly swell across Wellington Harbour to Eastbourne. Surfing into Eastbourne Beach, he had established a two minute lead on a chase pack that included Kohlar, Gellatly and New Plymouth’s Anthony Roebuck.

The leader wasted no time transitioning to the following 18k mountain run over the Eastern Harbour Ranges. Behind him the Australian broke away from Gellatly and Roebuck, but Ussher was revelling in the challenging harbour hills and slippery underfoot conditions and added another three minutes to his lead.

Another person revelling in the conditions was Rotorua firefighter Katrine Lawton. The mountain bike specialist came into the race as an outside bet to challenge defending champion Elina Ussher and world title runner up Fleur Pawsey. On the day Ussher failed to start due to illness, but Lawton put up an impressive performance that had onlookers wondering if she might be the next big thing on the woman’s scene.

In testing conditions Lawton surprised her competition and spectators alike by opening up a three minute lead on Pawsey in the opening kayak leg. But an even bigger surprise was Pawsey failing to fire in her specialist run section, which saw Lawton start her specialist mountain bike section with an unassailable six-minute lead. However the way the winner rode the Hutt Skyline was ironically the most surprising performance of the day. The mountain bike specialist was expected to excel at this discipline, but no one would have imagined a 27-minute winning margin.

Richard Ussher, however, showed no signs of his own busy racing schedule so far this summer. The former Olympic skier is noted for how often he is willing to put his reputation on the line. At the HuttValleyNZ.com Crazyman he shrugged of top competition despite two punctures on the final mountain bike section.

Australian Jarad Kohlar charged through the 36k mountain bike ride along the Hutt Skyline and down the Hutt River Trail, cutting almost 3min from Ussher’s lead. But after maintaining his lead despite the punctures, Ussher was content to keep an eye behind him while enjoying the final few kilometres of his third straight Crazyman win. He eventually finished two minutes clear of Kohlar in 4hrs 27min 11secs, with Neil Gellatly 12min further back in third.

In other highlights of the race, former New Zealand duathlon rep Dave Rowlands held off New Zealand mountain bike rep Mark Leishman in the mountain bike duathlon option to break his own course record with 3hrs 10min 11secs. Leishman’s partner Nic Leary made it a good day for their Palmerston North household by winning the woman’s duathlon in 3hrs 51min 52secs. Further back in the field Lower Hutt Mayor David Ogden proved once again to be the New Zealand’s fittest city leader by anchoring a team of local luminaries fitting entitled “inconvenient ones”.