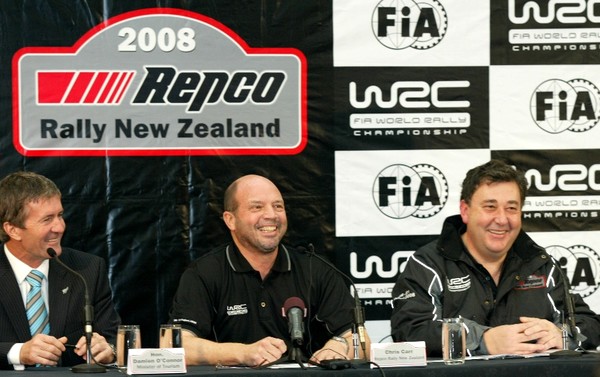 Repco, the largest automotive parts and accessories retailer in Australasia, has taken a bold new step in its long and successful involvement with motorsport in the region by becoming the naming rights sponsor for both Rally New Zealand in 2008 and Rally Australia in 2009.

The sponsorship of these two World Rally Championship (WRC) events was announced on 14 May with representatives of Repco New Zealand and Australia joining officials from Rally New Zealand and Rally Australia at a launch function in Auckland, New Zealand.

“Repco’s involvement with motorsport dates back to the 1960s when the company supported Sir Jack Brabham as he competed in the World Formula 1 championship,” says Colin Daly, executive general manager for Repco Australia and New Zealand.

“The whole trans-Tasman Repco team is behind the two event sponsorships – that’s more than 4,000 staff in 400 stores across the two countries! Repco will contribute an extraordinary level of in-store marketing support to build awareness for both of these highly regarded world-class events and we are sure that there won’t be another naming rights sponsorship quite like it in motorsport, or sport in general, in either New Zealand or Australia,” he adds.

“I’m delighted to announce the first Repco Rally New Zealand takes place from 28 to 31 August this year,” says Daly. “We’ll have to wait a little longer to announce the dates and venue for the long-awaited return of World Rally Championship to Australia, but I can assure motorsport fans that the Repco Rally Australia 2009 is going to be fantastic.”

“Already we’ve seen the enthusiasm with which the Repco team approaches a sponsorship project such as this!” says Carr, who heads the longest-running international event with world championship status in New Zealand.

“It’s just fantastic to work with a sponsor of Repco’s commercial stature. There’s a very natural alignment with Repco and Rally New Zealand and we are very much looking forward to working with the wider Repco team for our mutual benefit.”

Due to the sheer number of countries offering world-class rally events, the worldwide governing body of motorsport, the FIA, introduced a rotational event scheduling process in recent years. This saw Repco Rally New Zealand on the 2008 WRC calendar, but not Rally Australia.

“In 2009, the schedule is reversed. Repco Rally Australia returns to the WRC calendar, while Rally New Zealand has a rest year and returns in 2010,” comments Morrie Chandler, president of the FIA World Rally Championship commission.

“Repco’s sponsorship of two WRC events in two countries appears to be unique in our sport,” continues Chandler. “This decision fits well with the current rotational policy and will enable Repco to derive benefits in both markets. We, at the WRC commission, applaud their initiative.”

While details of the venues and route of Repco Rally Australia in September 2009 are still being finalised – an official launch is planned for later this year - the chairman of Rally Australia’s organising committee, Garry Connelly, says he’s delighted to have such a prestigious company like Repco confirmed as the sponsor.

“Repco has a long history of supporting Australian motorsport and this is a unique sponsorship agreement which will benefit all involved,” says Connelly.

“We’re pleased to share this sponsor with Repco Rally New Zealand and look forward to working closely with our friends across the Tasman. I’ve already had discussions with Chris Carr regarding how we can share other resources and support both our WRC events.

“Our goal is not only to promote these two events, but to lift the profile of World Championship Rallying, and rallying in general, in the wider Asia-Pacific region,” concludes Connelly.

Repco Australia and New Zealand has a number of strategic marketing initiatives planned to support both Repco Rally New Zealand and Repco Rally Australia, including the development of rally-specific websites for both markets and rally branded merchandise. Repco will also present consumer competitions and advertising campaigns themed around this dual world championship event sponsorship.
ENDS