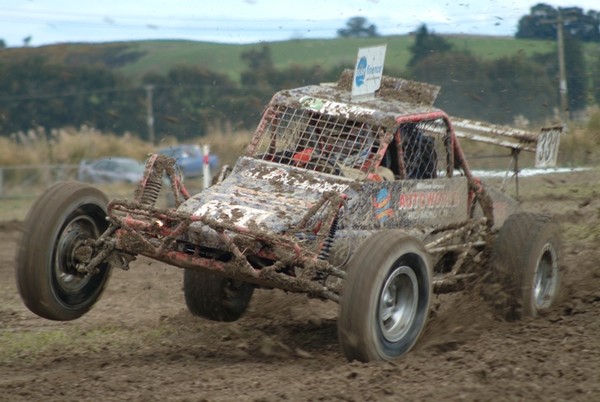 Moriarty out, Andreassend to the fore

Nelson’s Dennis Andreassend came through to win the day, making the most of a last chance points boost before the national final at Manukau in October.

Mechanical failure changed the championship aspirations of many of the front-runners, while the debut of a new talent in Challenger class reshaped the points battle for that category.

The one-day event on a farm course at Milton featured three heats for every class racing and an all-in feature race of 20 laps, all on a 1.4-kilometre course in a massive 40 acre maize paddock outside the town.

Moriarty had led the South island championship going into the round, and until the unexpecte4d breakage in his car’s tough Renaiult transaxle had looked set to take the outright championship lead.

But when the first race for the Leadre products Super 1600 class started, Moriarty found himself in a duel with longtime rival Dennis Andreassend. The pair swapped the lead down the first straight and into the first corner, Moriarty leading Andreassend until his transmission destroyed itself and allowed Andreassend a clear run to the lead and victory in the heat – the first of four in-class wins for the Nelson driver.

“I got a great start and got in front of Wayne, then he came back at me and re-took the lead. Wayne got in front of me and I was right behind him then suddenly he pulled over, I went past and when I came around on the next lap there he was, off the track.”

Andreassend’s car ran without fault all day. He said afterward his biggest problem with Moriarty missing was to manage the drive so he didn’t push the car too hard.

In his debut event, rookie Chang junior won three races from three starts in the car of Chris Devereux.

“I tapped a tyre in the first race but had such a margin over the field that it wasn’t a problem. The Challenger is a tricky car to drive because it doesn’t have a lot of power, but after the first race it wasn’t hard to adjust.”

Chang junior has only driven competitively once before, taking his dad’s Ford Falcon XR8 to victory in a mechanics’ race.

He was the only one in the Challenger heats to use hand-cut tyres to maximise traction, and his charge was only halted when the clutch plate in his car failed during the final all-in feature race.

Meanwhile dad Bryan had a lonely time, being the sole Camco ThunderTruck class entrant and running with the Camco class four trucks.

Though class four allows four wheel drive and the traction in the greasy conditions was less than ideal, Chang took his rear-wheel-drive GT Radials Ford Falcon to a handy lead over the class four entries and took maximum points for his class to win the South Island ThunderTruck class title and take a points advantage into the national final.

In his first full season in the sport, Andreassend (jun) is impressing with his aggression and commitment. He was the only racer to consistently challenge Densem through the day. He is building a points tally for the final round, which will see both Andreassend cars in action.

No production class trucks entered the event, handing Hamilton driver Maurice Bain a clear class advantage going into the final round. Bain is the outright North Island champion and a contender for the overall New Zealand title.

The heats for the ultimate buggies – class one – were all won by Christchurch driver Daniel Powell, in his wild turbocharged Jimco Nissan buggy ahead of Dunedin driver Jason Brookes.

Though the outright event win went to Andreassend, most of the class wins went to Christchurch-based drivers.

Otago’s regional pride was salvaged by Matthew Pratt of Queenstown who won the VW Shoppe Challenger class outright thanks to three second places behind new arrival Owen Chang and a second in the feature race behind Scott Campbell.