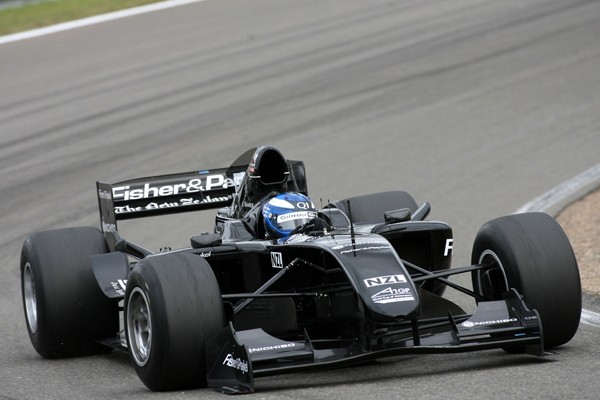 When the lights turn green at Taupo in January next year, New Zealand will be able to enjoy its first view of the new generation of A1GP Powered by Ferrari cars unleashed in a race environment, and it promises to be the country’s fastest ever motor race.

The new generation A1GP Powered By Ferrari car is already significantly quicker than the first generation of A1GP cars that raced at Taupo in 2007 and 2008.

The car, which will be used by all A1GP teams during the fourth season, completed an impressive 7,000 kilometres of testing in Europe in the hands of several very experienced racers, including Marc Gene and Andrea Bertolini. Gene was convinced the car will enhance A1GP’s worldwide reputation as the formula for action and overtaking, commenting: “It will produce exciting racing, it allows overtaking, and is an extreme drive.”

There’s no doubting its speed. It tested at Donington and broke the outright lap record, and did the same during the racing at A1GP Zandvoort, where Earl Bamber shone in the A1GP Team NZL car.

The car utilises a heavily modified V8 engine from Ferrari’s superb F430 and is expected to produce in the region of 550bhp – more than 400kw. In an ultra-light state-of-the-art chassis, that means mouth-watering performance and pace around the Taupo circuit.

“New Zealand’s motorsport fans are going to be in for a real treat at the next A1GP Taupo,” commented event CEO, Gary Dawson. “This new A1GP Powered by Ferrari car is a major step forward from the last one. It looks and sounds superb and will continue A1GP’s tradition of close racing where the best driver and country come out on top.

Early tests prove it’s going to be significantly quicker around all circuits, including Taupo, and there is no question the event will be New Zealand’s fastest ever motor race. Who’d want to miss that?”

ABOUT A1GP WORLD CUP OF MOTORSPORT
Pitting nation against nation in the World Cup of Motorsport, A1GP unites countries in a competition where human bravery, skill and excellence determine victory. Racing identical single-seat cars, the deliberately equalised technology allows countries as diverse as the USA, Lebanon, France, China and South Africa to compete on a level playing field.

With three days of on-track action, an A1GP event offers a rare opportunity for fans to interact with teams and drivers. Exclusively inclusive, A1GP brings the thrill of international motorsport to billions of fans across the globe.