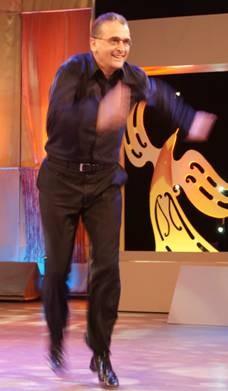 Its Official: A Kiwi is the Worlds Fastest Tap Dancer!

Guinness World Records™ has just contacted Wellington man Tony Adams to inform him that he is now the fastest tap dancer in the world – a feat all the more extraordinary considering Tony was crippled at birth.

Tony is now the official Guinness World Record™ holder for Most Number of Tap Beats in 60 Seconds. He has smashed the previous record of 512 tap beats per minute held in England with a staggering 602 beats.

Tony’s new speed tap dancing record equates to a mind-boggling average of 10 tap beats per second! He peaked at 15 tap beats per second during the minute.
“It’s pretty challenging to sustain that pace for 60 seconds,” Tony says, “and a minute’s never felt longer!”

“The Americans invented tap dancing as we know it and many people now associate it with the Irish, so it’s very satisfying that the record is now Down Under. I’m hoping this new Guinness World Record™ increases the profile of all New Zealand dance internationally, as we have many dancers at a world class level in all forms.”

Tony’s mother put him to tap dance at the age of three to straighten and strengthen his calliper-bound legs in an effort to avoid surgery.

It was a brave move based on a mother’s intuition, but an inspired one: much to the amazement of doctors, Tony’s legs were corrected enough to be able to walk and run like other children his age.

Because of the teasing that came with being a dancer in a tough neighbourhood, Tony never really enjoyed tap dancing as a child. Despite this, he went on to win many national dance titles and become New Zealand’s first male tap dancing teacher in his late teens.

Like teenage boys the world over, he pored over every annual edition of the Guinness Book of World Records. He studied the tap dancing entries and knew at the age of 15 he could break the speed record.

But it was not until a challenge issued on a chance meeting with a Hollywood film producer in the United States early in 2008 that the now 49-year-old share-broker and motivational speaker decided to prove it – over three decades later.
He attempted and broke the record live on New Zealand national television because media corroboration is a compulsory part of the rigorous Guinness World Record™ verification process, using the opportunity to raise money for the Royal New Zealand Foundation of the Blind’s Guide Dog Service.

Tony’s 82-year-old mother, Mary Adams, watched her son break the record on television.
“I’m very proud of him but I really can’t understand what all the fuss is about,” she says. “He was a much better dancer when he was younger.”
Well-known tap dancing teacher Jeanette Mullins acted as an official witness at the attempt, and was astonished to see Tony don the patent leather tap shoes that he last performed in 32 years ago, describing them as antiques.
Tony’s record-setting shoes are old-style tap shoes with screw-on metal plates, whereas modern tap dance shoes have the plates riveted to the sole.

The 602 tap beats that Tony danced in 60 seconds were recorded with a PZM microphone and specialised computer software, meaning each individual tap could be converted from audio to digital for quantification purposes. The technology eanbles sound waves to be displayed graphically like heartbeats on a heart-rate monitor, or like ‘snicko’ in cricket.

Tony has been invited to tell his remarkable record-breaking tale to various groups at functions around the country where the high-energy speed tapping has been captivating audiences. He has also attracted the sponsorship of Intercontinental Hotels and Resorts Group and Sydney-based Scorpio Music to assist him promote New Zealand dance overseas.