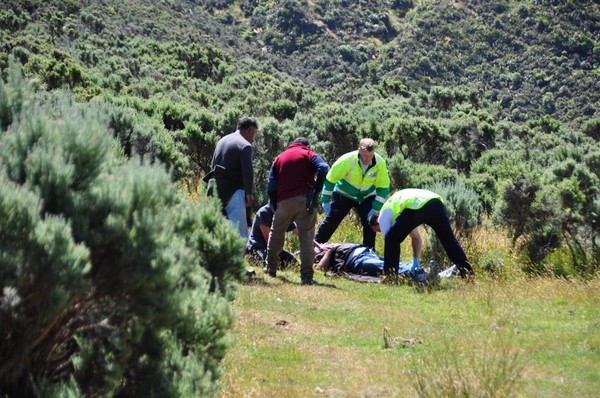 The helicopter, with two Wellington Free Ambulance paramedics onboard, was sent to the Orongorongo River Valley area where a woman was reported to be seriously injured after a horse rolled over her. Upon arrival at the scene the ambulance paramedics found two patients - a 47 year old Avalon woman and a 59 year old Normandale man.

As we understand it, the woman's horse lost it's footing and fell over, rolling over the woman in the process. She was knocked unconscious by the fall. Two horses behind the woman collided, throwing the man from his horse causing a back injury.

A third member of the group of five riders rode from the area to get a cellphone signal and call 111 to report the injured woman. He was unaware of the 2nd riders injuries at the time. The Westpac Rescue Helicopter picked up the informant who was able to direct the helicopter to the scene.

"The man who rode out kept his wits about him and was able to direct us directly to the injured parties" says Westpac Rescue Crewman Dave Greenberg. "Our paramedics were surprised to find two injured people, but thanks to the versatility of our people and equipment we were able to transport them both, on stretchers, to Wellington Hospital".

Both patients are being treated in the Wellington Hospital Emergency Department. The woman is suffering from a suspected concussion and the man is being treated for back injuries. Neither patient's injuries are life threatening.