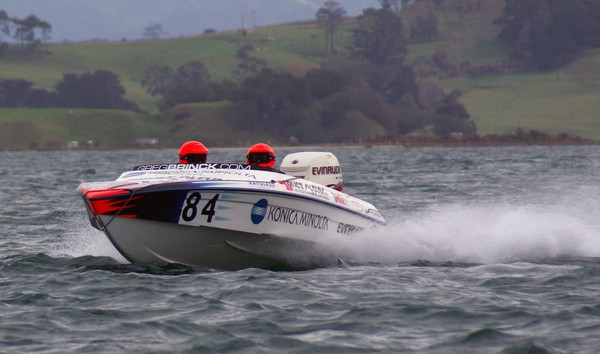 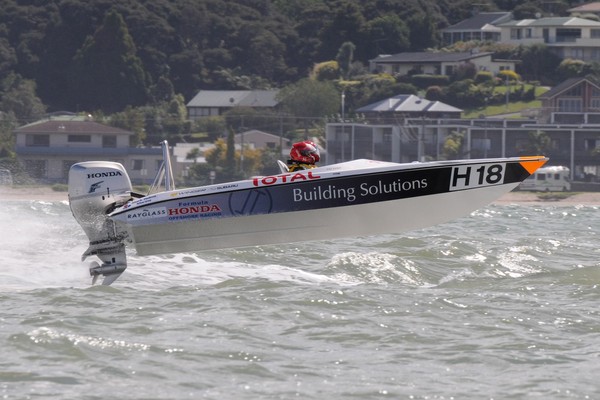 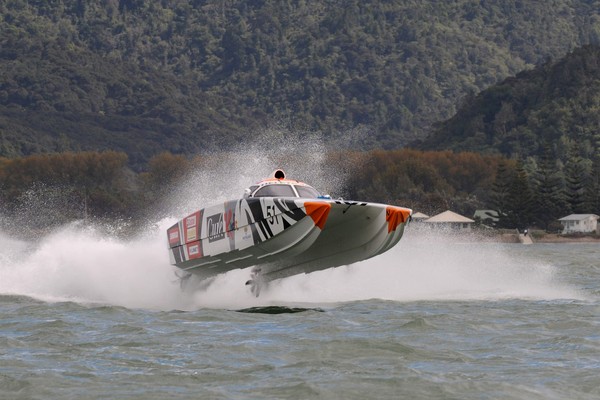 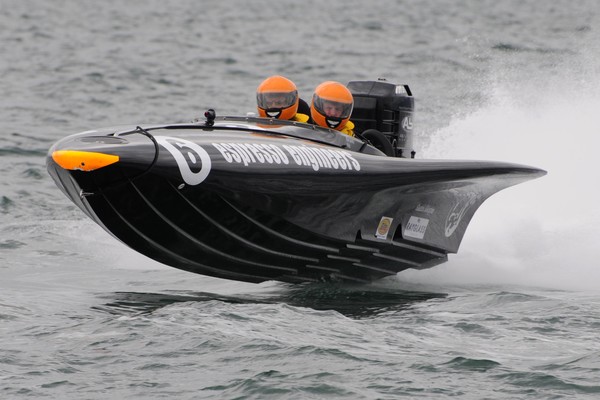 A testing offshore race course out from the Gulf Harbour Marina at the end of the Whangaparaoa Peninsula awaits competitors in the final round of the 2009 Rayglass New Zealand Offshore Powerboat Championship on Saturday 2 May.

Superboat ‘Cure Kids’ went into the lead of the 100-mile championship during the last round at Whangarei’s Marsden Cove Marina and now has a 273 point advantage over closest rival ‘Fairview Windows & Doors’. With a race win worth 475 points and second place 375 points, a close-fought championship finish between these two top superboats is expected. But ‘Cure Kids’ driver Tony Coleman, from Auckland, says he’s not counting his chickens just yet.

“It would be beyond our wildest dreams to win the championship in our second year contesting a superboat,” says Coleman. “But it’s normally pretty rough at Gulf Harbour and for most of the boats, us included, it’s a matter of surviving and finishing.”

Coleman took ‘Cure Kids’ to second place in his first superboat season in 2008, and with experienced throttle-man Chris Handley, from Mt Maunganui, alongside has finished all six races run so far this season.

“Consistency and reliability have been the keys; we’ve been lucky to have no breakdowns,” says Coleman whose strategy of naming the boat after the charity Cure Kids has helped raise awareness for the public face of the Child Health Research Foundation. “We get such a lot of positive feedback about the awareness we’ve been able to generate for Cure Kids, thanks to our supporters Building Solutions, Simrad, Castrol, Line 7 and Propeller magazine.”

In Whangarei ‘Fairview’ flipped trying to avoid a marker in the inner harbour course and since then the team has worked frantically to ensure the brand-new Skater superboat is ready for racing this weekend. Driver Ted Taiatini was hospitalised for a couple of days as a precautionary measure after inhaling water when the boat was upside down, says New Zealand Offshore Powerboat Association (NZOPA) vice-president Cary Gleeson.

“But Ted and owner/co-driver Warren Lewis have successfully tested ‘Fairview’ and we’re 99 per cent sure they’ll be racing this weekend,” says Gleeson.

The 100-mile championship race will also feature the superboat ‘A1 Homes’ piloted by Scott Lewis, brother of Warren, and Murray Tuffin, both from Auckland. Having joined the series at Maraetai’s third round, ‘A1 Homes’ holds third place overall. The superboat lite class boats ‘Rayglass’, with Wellington daughter and father team Kelly and Grant Smith, and ‘Doosan’, with Auckland’s Sam Filmore and Cary Gleeson, round out the 100-mile championship contenders.

Brinck and co-driver Eldon Archer have ‘Konica Minolta’ positioned at the top of the 60-mile championship leader-board, but with just 125 points’ advantage over closest rival, fellow super-60 class boat ‘Espresso Engineers’, Brinck knows the championship title will go right down to the wire.

Three boats are in contention for the 60-mile championship: ‘Konica Minolta’, ‘Espresso Engineers’ with Aucklanders Mike Gerbic and Haydn Mearns, and ‘Holsam’ driven by Auckland’s Mike Cameron and Duncan Field.

“Being a true offshore event, the Gulf Harbour conditions can be quite testing so the importance of finishing will be the priority, especially if it ‘cuts up’ out there,” comments Brinck. “We will see how the conditions suit us on the day. While our boat doesn’t ideally suit rough water, we are still capable of ‘pushing on’ in tough conditions.”

Worthy of note, says Gleeson, is the strong effort from Gerbic and Mearns in ‘Espresso Engineers’.

“This is Mike and Haydn’s first season in offshore powerboats and we expect the conditions at Gulf Harbour to favour their style of inline v-bottom boat – a Swedish Ocke Mannerfelt design commonly known as a ‘bat boat’, so the final 60-mile race is definitely going to be exciting to watch,” says Gleeson.

Gulf Harbour’s offshore powerboat races start at 1:00pm. Teams set up home for the day on Hammerhead Reserve on the ocean-side of the Gulf Harbour Marina home.

“It’s a very family-friendly event,” reminds Gleeson. “It’s also free to watch. So spectators are very welcome to come down and stroll around the boats before and after the racing. Food outlet and entertainment help create a really fun, relaxed atmosphere. There’s great viewing of the whole race course from Hammerhead Reserve, so come along; we look forward to seeing lots of spectators for this final race of the season.”

A podium presentation will take place at the reserve at 3pm, followed by the end-of-season prize-giving at
Carpe Diem Restaurant and Pacific Bar from 6:30 pm. “Everyone’s welcome!” says Gleeson.

Television coverage of the 2009 Rayglass New Zealand Offshore Powerboat Championship commences on Sky Sport 1 on Friday 1 May and running through into June. Each episode, or round, is repeated three or four times on various Sky Sport channels.

Event details and results are posted on the NZOPA website, www.nzoffshore.co.nz . This final round of the series is sponsored by Marineworkz and AB Marine Services.
ENDS/