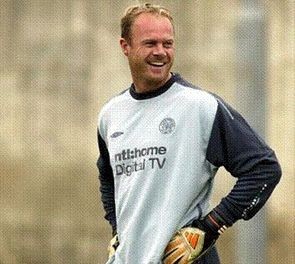 Gould to assist at Phoenix

Gould, 40, played more than 150 games in goal for Celtic from 1997-2003 and also represented Coventry, Bradford City and Preston North End in England. He earned two international caps with Scotland.

Wellington Phoenix chief executive Tony Pignata said the experienced Gould was a great get for the club and the obvious choice to complete the Phoenix’s three-man coaching team.

“We had huge interest in the position from throughout New Zealand, Australia and Europe but Jonathan was clearly the sort of person we wanted in the job. His goalkeeping experience will be invaluable – we’ve never had someone working fulltime with the keepers – and he’ll also be heavily involved in other coaching areas.

“He has top-flight playing experience and has proven his ability as a coach at Hawke’s Bay United. It’s also great to appoint someone from here in New Zealand. It goes to show that we have suitable and talented people in the coaching and playing areas right here in this country.”

Gould said he was looking forward to returning to a fully professional environment in a coaching capacity with the Phoenix.

“I’m absolutely thrilled to be joining Ricki and the staff at the Phoenix. I’m grateful that Ricki and Tony Pignata saw enough value in my experience as a player and coach to warrant being part of the set-up.”

The challenge ahead was exciting, he said.

“My role will be to support the management by providing an environment to take this team to the next level. We need to encourage a winning mentality both on and off the park. If we do that as a group then this will be a great season for the Phoenix.”

Gould will begin in his new role on May 4 as the Phoenix step up their pre-season training programme.