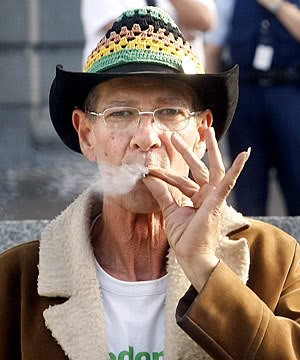 The Aotearoa Legalise Cannabis Party is pleased to announce that Dakta Green will stand for the party in the upcoming Mt. Albert By-Election. The Mt. Albert seat was made vacant by the resignation of Helen Clark.

Dakta Green is already well known as an advocate for cannabis law reform and has recently been interviewed on the subject by the BBC.

"After you've spent a little time in jail for growing a little weed, it tends to focus your mind on whether or not that's a fair and proper response from authorities to our citizens. I, along with millions of others around the world, have decided that cannabis should be legally available for adults" says Dakta Green.

Since serving prison sentences for cannabis both here and in the US, Dakta Green has helped spread the word about cannabis law reform far and wide. In the last eighteen months, he has toured New Zealand extensively in the Cannabus - NORML's mobile smoking lounge - affectionately known as Mary-Jane. Along the way he has met with cannabis activists and drawn attention to the detrimental effects of cannabis prohibition. A highlight of this time was a 42-day, 42-town trip from Auckland to Dunsterdam (Dunedin), in each town smoking cannabis publicly as an ongoing act of civil disobedience.

Dakta Green is also the founder of a West Auckland cannabis club called The Daktory. The Daktory houses the new Daktavist branch of NORML and is a place where members gather and plan their strategies to effect law change. As a service to members - and as a social experiment - a dispensary was opened, serving a range of cannabis products. The popularity of the dispensary led to a need for restructuring after 1,500 members joined the club in under two months. Dakta Green believes selling cannabis was distracting people from the core function of the club.

"I am not prepared to go to prison for operating the fanciest tinny house in town. The Daktory was established a focal point for Cannabis Law Reform. We now operate a BYO policy and strictly disallow alcohol and other drugs." says Dakta Green.

The Daktory is also home to Mary-Jane, the Cannabus and will be the ALCP headquarters for the Mt. Albert By-Election campaign.

Dakta Green has previously had a high profile in the business community, being Chairman of the campaign for Saturday trading, which was successful in 1980. He is also the former Pakuranga branch chair for the National party and former owner of the International Market in Auckland. He opened New Zealand's first casino in 1986, which operated on board a vessel outside territorial waters.

The Aotearoa Legalise Cannabis Party has undergone a resurgence in recent years. Dakta Green will bring a wealth of experience to the party. In last year's General Election, the ALCP nearly doubled its support from 2005, building on the achievement of second place in the 2004 Te Tai Hauauru By-Election.

"While I'm realistic about the challenges that lie ahead, I am confident that I will win the Mt. Albert seat and bring the ALCP into Parliament. In these troubled economic times, the ALCP is the only party with the policies to boost the economy out of recession. This will be achieved by regulating and taxing the billion dollar cannabis and hemp industry in New Zealand." says Dakta Green.

"People of Mt. Albert, this is your opportunity to make history. We have seen through the lies and injustices and are absolutely serious about changing the law, ending the misery of prohibition and turning New Zealand's fortunes around." says Dakta Green