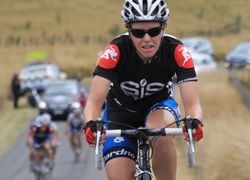 Wellington’s rising star cyclist, 20 year old Rachel Mercer has secured a contract with European professional cycling team Hitec. The outstanding progress of Wellington’s 2007 Emerging Athlete of the Year experienced a slight hiccup when the European team she signed with last year failed to renew their licence through lack of sponsorship. All is back on track with the signing of a new team.

At only 20 years old and in her second year as a senior, Rachel is enjoying the life of a professional based in Holland and racing throughout Europe. Already this year, Rachel has competed in China with her NZ team, CycloSport and won the prestigious TA Tour before embarking on her European campaign.

After less than three days to recover from jet lag, Rachel fronted up to two races in her first weekend in Holland. The strong start confirmed her undoubted ability to her new team.

With next year’s Commonwealth Games very much part of her programme and the 2012 London Olympics a priority the future has much to offer this young cyclist.

Rachel will shortly be followed to Europe by her NZ CycloSport team member Emma Crum who will share accommodation with her and race for a Dutch Club to gain European experience.