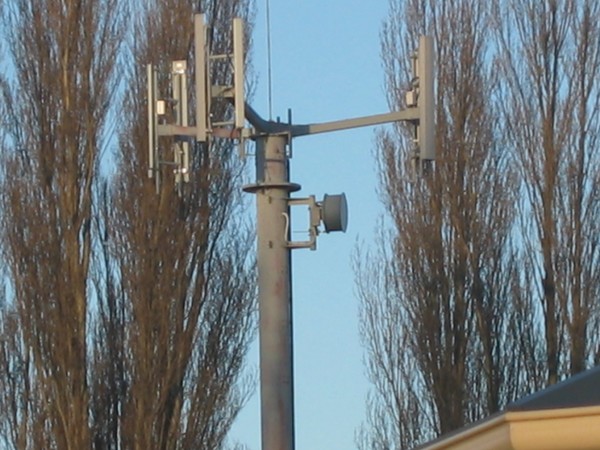 The day is now approaching in which government mind
control technologies will be directed at you, your neighbors, and your
loved ones. Every single day, equipment is being erected and installed
in this country with the hidden purpose of exerting mind control over
the entire population. Everywhere in this country ,
ELF/microwave transmission towers are being erected. The antennae
usually look like four slightly curved vertical plates about 2 feet in
length and located in either 3 or 4 quadrants around the tower, two
thirds up from the ground. Just look around, you'll see them. And
you'll also notice more of them going up once you begin to pay
attention. No one is saying anything, but you're expected to presume
that they're for cell phones. (Do you really think that we need that
much 'cell phone' transmission capability, every few blocks? Do you
realize how very little energy is used by genuine cell phone usage?
Yet these towers are capable of putting out levels of power that
exceed cell phone requirements by a wide margin) These mind control
technologies have been in place for a long time. It's not an accident
that the frequency band chosen for cell phone use just happens to
match the second order waves that Wilhelm Reich discovered in the
late1940's to effect thought transmission and allow the mind to be
manipulated without the victim realizing it. Reich worked on this
project secretly for the CIA for over 5 years, from 1947-1952, until
he realized who the CIA was planning to use the mind control on -the
American people. He was outraged that he was deceived and used for
such a treasonous motive and swore never to cooperate with the CIA,
FDA, etc. again. Reich was covertly murdered in Federal prison in
1957, just a few weeks before he was due to be released, having been
in prison for 2 years on a trumped up charge leading to a contempt of
court citation. He was reported to have had a 'heart attack'. He was
strong as an ox. He was murdered two weeks before his parole board
hearing. His last book, written in prison, was found to be 'missing'
after his death and never returned to his family.

A method was discovered to disable these ELF towers from exerting
their mind control functions by placing a simple device known as an
orgone generator within a radius of 1,300 feet of these towers. These
microwave towers are used in conjunction with HAARP based technology
to not only affect subliminal mind control influences, but also to
control the weather (currently {2007}, the creation of artificially
induced drought conditions are also greatly influenced by the
population-reduction chemtrail spraying operations which take place
daily over the skies in America and in many other countries) .

Patrick Flannagan also recorded an interview with talk show host Jeff
Rense on June 30, 2003 and offered important insights on how to
counter electronic mind control being beamed to us from the electric
wiring within our homes and from microwave towers (promising
information that should be studied).