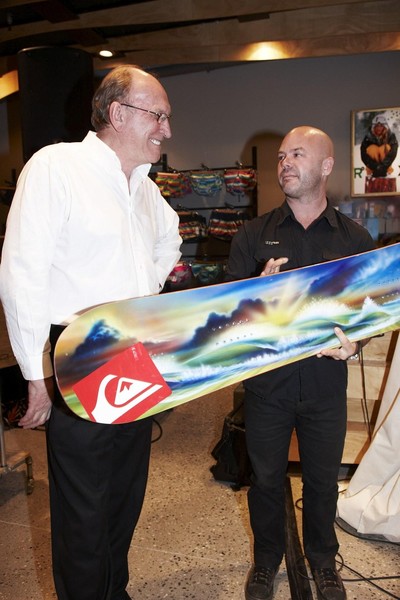 “It’s possibly not the kind of turn Quiksilver had in mind when they gifted me a snowboard,” Mr Geddes said.

“It’s quite an amazing thing to behold and clearly I was the envy of every snowboarder in the room. I had young guys coming up to me and saying ‘wow it’s a Wade Lewis, awesome dude,’ Mr Geddes said.

Despite spending most of his youth surfing, Mr Geddes conceded a transition to snowboarding was unlikely.
“I was really touched by the generosity of Quicksilver but I think the only good turn I’m ever going to make with the snowboard is to offer it up for a great cause,” he said.

The snowboard, estimated to be valued at $3000, was being offered by the Mayor for silent auction, the proceeds to go to the Bruce Grant Youth Trust Winter Festival Special Achievers Award recipient 2009, Queenstown downhill ski racer Tim Cafe.

“Quiksilver and the Winter Festival team have kindly agreed to assist in this endeavour,’ Mr Geddes said.
The snowboard would be on display at Queenstown’s new Quiksilver store in the Mountaineer Building, where people could go and register their bid up until midday on Sunday.

The winner of the silent auction would be announced at the final of the Rail Jam at 4.30pm at Coronet Peak.