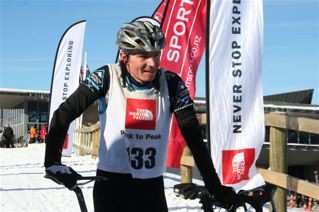 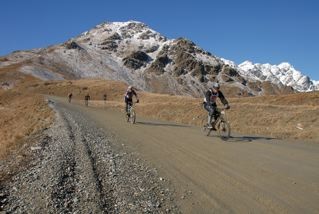 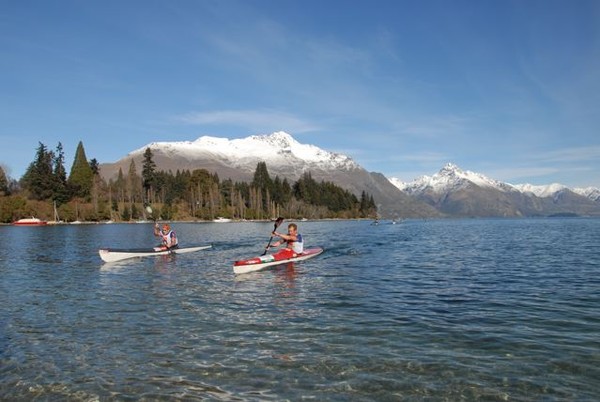 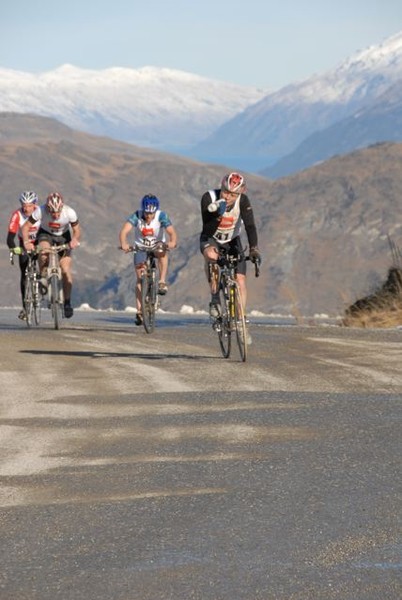 Talented young multisporter and adventure racer Dougal Allan (Wanaka) put the hammer down in the The North Face Peak to Peak in Queenstown yesterday to win the high profile event, which races from the top of The Remarkables to the top of Coronet Peak, for the second time.

Allan stopped the clock at the finish line at Coronet Peak in 2hrs 19. 13, three minutes ahead of prominent multisporters Gavin Mason (Wanaka) in 2.21.44 and Mike Kelly (Queenstown) who took third in 2.24.16. The 2008 winner Glen Currie, returning to endurance racing after a serious illness, achieved a creditable fourth place.

The event attracted 50 individual competitors and 67 teams and was held in cold but sunny, clear conditions. It began with a 2km ski or snowboard on The Remarkables finishing at the access road, followed by a 17km mountain bike road down the high altitude road to Lake Wakatipu. A 7km paddle to Queenstown Bay led to a 9km run from Queenstown via Arthurs Point to a changeover point near the foot of Coronet Peak for the final 9km cycle ride to the finish.

Race Director Geoff Hunt said a highly talented field competed and there were some excellent individual results. “Dougal was going to be hard to beat after taking the lead on the run. As the winner in 2007 he knew what was expected of him if he wanted to take the title again.”

Allan, who was eighth in the Coast to Coast Longest Day this year, was pleased with his win. “Conditions were perfect but skiing for me was definitely the hardest leg. I managed to get away on the run but the Coronet Peak road biking section was interesting as I only had my ‘granny gear’ working.”

Wanaka physiotherapist Joanne Williams proved to be too strong for the rest of the women’s open field, finishing after a solid race, in 2.47.49. She made a fast start on the skiing leg and was among the top contenders to complete this section, putting her in an unassailable position from the outset.

“It was a great experience but it was definitely a bit of a grind in places,” she said after finishing ahead of Roxburgh athlete Kath Kelly in 2.54.25.

A text book performance was executed by the crack Outside Sports Queenstown team of Geoff Small, Jim Hawkridge, Steve Norton and Adrian Bailey to win the coveted open teams’ title. The team, who claimed it had been “a long time coming,” was given a flying start by New Zealand freestyle guru Geoff Small who blitzed the other skiers on The Remarkables Homeward Bound run to set them up for the lead throughout the race.

“We owed it to him to keep up the same fantastic pace for the rest of the race,” said Hawkridge.

Long time competitor Eric Billoud (Queenstown) was the fastest veteran man in 2.43.22. “It never gets any easier,” he quipped as he crossed the line.
Well known veteran Bill Godsall (Cromwell) who has participated individually in every event since it started 16 years ago, competed in a team for the first time, representing Queenstown Paper Plus.

Samantha Wright (Queenstown) reclaimed her 2008 title as the fastest veteran woman clocking 3.11.23. The fastest junior was Blake Luff (Alexandra) in 3.03.28

The women’s teams event was a close tussle with Smashing It In the Dog (Dunedin) claiming the honour in 2.32.39 from Wanaka Physiotherapy in 2.35.42. Team Sportbase (Queenstown) was first across the line in the mixed team section in 2.15.47.

The fastest Veteran Men’s team was Browns/Avanti Plus/Pitch Design/Suit Hire (Dunedin) in 2.20.23 and the Veteran Mixed Team title went to Queenstown Pedallers in 2.55.48.

Hunt is delighted with the success of the event again. “When you combine two mountains and a lake with running and cycling it is hard to find any other event which is quite so unique. It gives a whole range of athletes, from elite to the very recreational, a chance to compete in something which is distinctively Queenstown.”

The North Face Peak to Peak raised funds this year for the Bruce Grant Youth Trust, set up in memory of Queenstown adventurer Bruce Grant who died after summiting K2 Mountain, to support young Queenstown sportspeople in their endeavours.