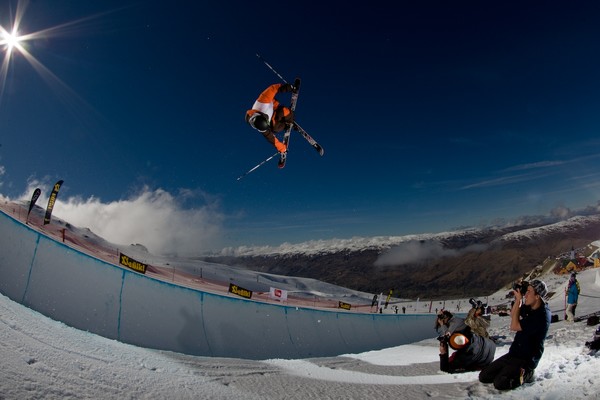 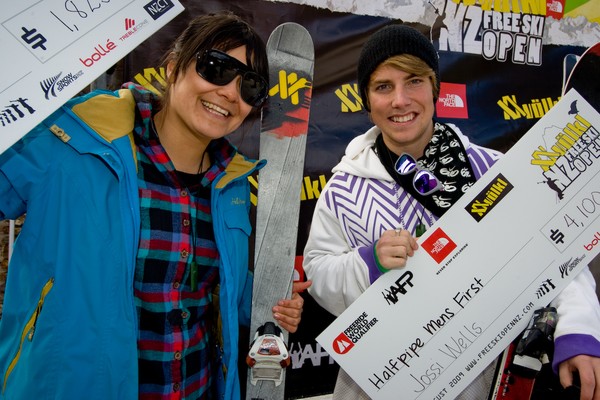 Riding with confidence on his home mountain, Wanaka’s Jossi Wells captured the pinnacle event of the season Thursday, winning the Men’s halfpipe competition at the Volkl NZ Freeski Open at Cardrona Alpine Resort.

Cardrona’s 22ft halfpipe, which was cut to perfection by head shaper John Melville, gave Wells the opportunity to execute a series of technical tricks with smooth landings.

“I was really happy to take it out. I didn’t have high expectations today as I haven’t skied much pipe this season,” said Wells. “I laid down a pretty good run and walked away with a win.”

Taylor Seaton, of USA, who was the only rider dropping in switch (backwards) followed up in second place, while Finland’s AJ Kemppainen secured third.

“This it the fourth year I have competed here, but my first time on the podium,” said Seaton. “The comp was run for the riders, which is like it should be. I loved the good vibes, the reggae music and the overall running of the event.”
Wanaka’s Janina Kuzma, who also won the North Face Big Mountain at the Volkl NZ Freeski Open for the fifth time in a row earlier this week, switched her big mountain skis for park skis to win the Women’s Halfpipe.

“I’m really happy to win,” said Kuzma, who placed second in halfpipe at the Volkl NZ Freeski Open back in 2006. “It was good to come back and ride in the park again.”

Fellow Kiwi Lyndon Sheehan pleased all spectators with some of the best amplitude in the contest, placing fifth overall.

Wells, Kuzma and Sheehan are members of the New Zealand Freeski National Team.

The Volkl New Zealand Freeski Open is fast becoming the traditional opening event of the international skiing calendar, rivalling the US and European Open events as a benchmark in world-class freeski competitions.

For more information about the Volkl New Zealand Freeski Open 2009, go to www.freeskiopennz.com.

Since 2008, the Freeride World Tour has made sports history bringing together top international freeride skiers and snowboarders, men and women, competing at prestigious resorts around the world, battling for the World Champion title. The Freeride World Tour (FWT) is welcoming The New Zealand Freeride Series 2009 as a Freeride World Qualifier (FWQ) event for the 2009-2010 season. The New Zealand Freeride Series is comprised of three events, The North Face Big Mountain at the Volkl New Zealand Freeski Open at The Remarkables and Treble Cone (11-16 August), the K2 Big Mountain Chill Series at Craigieburn and Mt Olympus (26-30 August), and the Export Gold Xtreme at Whakapapa, Mt Ruapehu (8-13 September). As a premier event, the Volkl New Zealand Freeski Open offers double the points in the overall Series result. www.freerideworldtour.com

About the Association of Freeski Professionals World Tour (Slopestyle and Halfpipe)

Event rankings are based upon course construction, prize money, media exposure and quality of competitor field and determined by the Executive Committee of the AFP. Final points for each event are determined after the start list is confirmed and the strength field based on AFP standings is weighted into consideration. The Best four results are used for halfpipe and the best three results for Slopestyle and Big Air to determine the World Champions. www.afpworldtour.com

Principal Sponsor & Official Ski Higher, faster, further – that motto may work for the Olympics, but not for Völkl. There’s more to it than that when it comes to developing new ski models: more precise, agile, dynamic, powerful, cushioning, individual, comfortable, intense, flexible, variable, safe, carving. In other words: our goal is to make skiing a little bit better each year. We use technical innovation to drive forward the development of skiing. Why are we doing this? It’s quite simple: We don’t view the limits of physics as the summit, but rather as just another step on our path. We use know-how, enthusiasm and German engineering to work constantly on improvements. Even if they appear quite miniscule at first – over 85 years of experience have taught us that big successes often depend on the small details. http://www.voelkl.com/index.cfm/EN/3

About The North Face