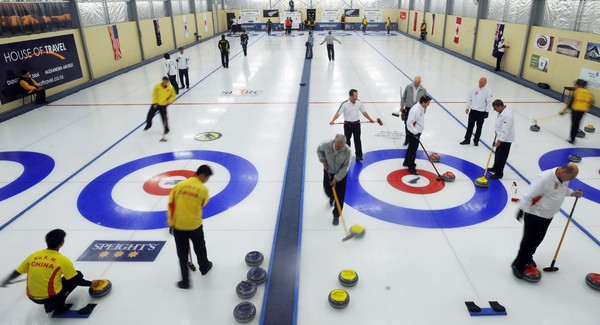 Tuesday was an exhilarating day at the Maniototo International Curling rink with some unexpected upsets and some teams emerging as strong contenders on what was the third day of play.

A packed public gallery witnessed a strong and exciting men’s fourth round. China and Korea played a riveting, skillful game that was close all the way until Korea dramatically stole the tenth and final round to win 5-4. It continues the winning streak for Korea, who is unbeaten. Korea’s second Lim Myung Sup said China had edged Korea out of the bronze medal at the World University Winter Games in Harbin, China in February and so they came to the 100% New Zealand Winter Games with a goal. “We made a team promise to beat China,” he said.

Czech Republic had its first win of the tournament in a strongly contested game against Canada. Scores were fairly even throughout and they went into the ninth and final round tied at 7-7. A score of 4 by Czech Republic won them the game, 11-7 Canada has yet to win. Another hard fought game was between USA and Australia, who were also tied going into the final round. Australia won with a final score of 5-3. Japan beat New Zealand 11-4.

Teams performing the strongest in the men’s round robin standings are Korea, Australia and Japan.

There was an upset victory in the women’s fifth round when Olympic qualifiers, Japan convincingly beat world champions China, 10-3. Japan stole 4 points in the third end and never looked back, scoring consistently and finishing the game with an eighth end score of 3. China’s skip Wang Bingyu said it was difficult to come back from the third end, “Japan is so strong,” she said. China coach Weidong Tan said at that point “they lost confidence” and that along with the ice conditions compounded the situation. “The ice was good, but a bit just a little heavy – a surprise for inexperienced players. We are learning more and more after a loss game,” said Weidong Tan.

However, in the women’s sixth round today, China redeemed itself with a strong game and a decisive victory over Korea, 12-2. Meanwhile, Japan who opened strongly against Australia, unexpectedly found itself in a close game and had to battle to win, with a final score of 8-5. Australia has yet to win a game.

Back to the women’s fifth round, New Zealand and Australia went head to head in a tight contest, with New Zealand eventually prevailing, 7-4. New Zealand gained an early advantage with a big steal of 2 in the third end. But Australia came back in what became a tit-for-tat game with players on both sides rising to the challenge and making good shots. The eighth end proved critical, going into it the score was 4-4, but New Zealand pulled away to score 2 and followed it up with a 1 in the ninth and final end to win.

Teams performing the strongest in the women’s double round robin standings are Japan and China.

100% Pure New Zealand Winter Games continues tomorrow (26 August) with two more rounds each in the men’s round robin and the women’s double round robin.