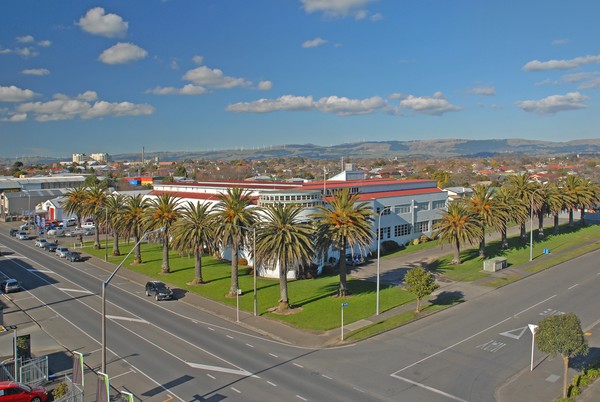 Iconic Libertyland building up for tender

The iconic Palmerston North landmark ‘Libertyland’ - located strategically on the corner of Tremaine Avenue and Roy Street – is being taken to tender by Bayleys as part of its latest Total Property portfolio offerings.

Marketed by Lewis Townshend and Karl Cameron of Bayleys Manawatu and David Gubb of Bayleys Auckland, the property at 666 Tremaine Avenue was most recently home to the Pacific Brands clothing company which closed at the end of July.

Built in the 1940s, the late Art Deco-style building with its curved corner profile has Libertyland signage on the front along with the initials R. & W.H. S. which refers to the property’s foundation ownership by R. & W.H. Symington’s and Co, corsetry and underwear manufacturers who set up business in New Zealand in the 1930s. This was an offshoot of the English-based firm of the same name and they sent trained English women out to New Zealand to give tuition in making underwear to those employed by the company here.

The property comprises 7425sq m of level land held in one title and a substantial 3460sq m building constructed largely of concrete. Mr Townshend says the property was clearly built with longevity in mind.

“It is apparent that the building has been constructed of quality materials and the solid Matai timber flooring on the first floor is just one example. The original plans and old pictures of the building are available to a prospective purchaser, and whilst the land has an inherent value given its size and location, people do see value in the building itself as it stands.”

“There is life left in the old building for sure and it could be reinvented as a retail showroom, a gallery – even a comprehensive medical centre given the ample parking and location,” says Mr Townshend.

The main building comprises three levels with the ground floor and first level each having an area of 1605sq m and the third level, 60sq m.

“The ground floor was originally where all the knitting machines were located while upstairs, there were cutting tables and sewing rooms along with offices. The decor is fairly dated, but the area is still configured as office space. A spiral staircase leads up to the circular area which would originally have been the manager’s office,” says Mr Townshend.

Outbuildings include a small, low stud storage shed attached to the rear of the building, an open-sided bike shed and a galvanised steel mesh compressor cage. There is an extensive sealed securely-fenced yard, a sealed access road and large areas of lawn.

The Phoenix palm trees that flank the property on two sides are protected as an entity under the Palmerston North City Council’s District Plan.

“The property would be regarded as the finest redevelopment site currently on the market in Palmerston North as Tremaine Avenue now carries some of the city’s highest vehicle counts,” says Mr Townshend.

Tenders close with Bayleys on 24 September 2009.