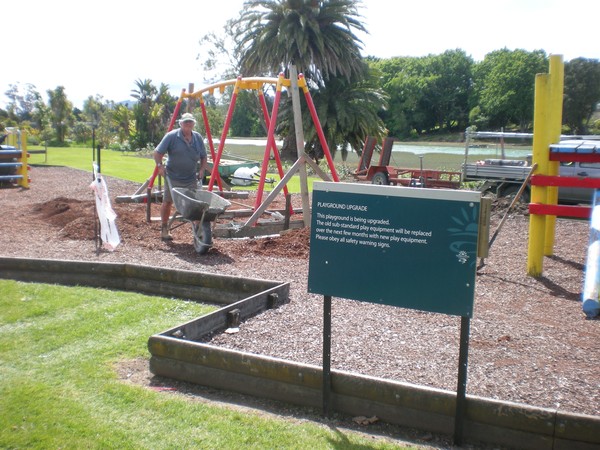 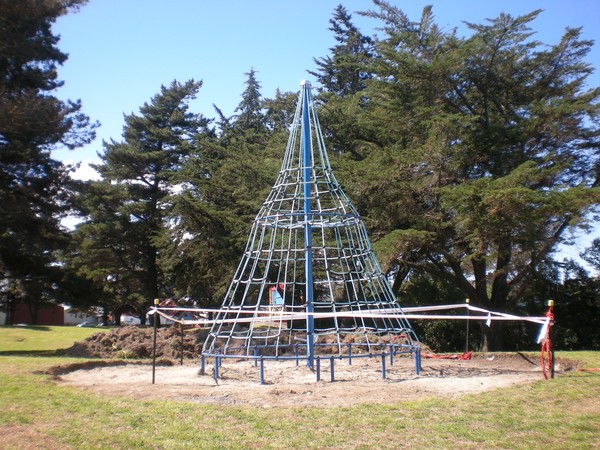 Families who enjoy using the Botanical Gardens playground will notice some changes taking place. Gisborne District Council is upgrading the play equipment, starting with an old set of swings that was removed last week. This two-seater swing has been replaced with a modern set that will have three seats.

As this playground is designed mainly for the under 12’s, the new swings are not as high as the old set. A second set of swings will be installed next week. In total there will be six swing seats available replacing the previous four.

A new ‘Dippy Disc’ and see-saw will also be installed soon. Other new equipment will be added over the next two years and some older items may be refurbished. Material from the old swings will be recycled and used elsewhere on reserves for fencing and gates. A sign has been erected at the entrance to the playground telling visitors about the upgrade.

This playground upgrade is following recommendations from the recently approved Gisborne Botanical Gardens Management Plan. Feedback on the plan was requested in 2008 through a public submission process. A record 300 submissions were received. After considering this feedback, council approved the management plan in June this year.

Both the Waikanae Beach playground and the Adventure Playground are also having an upgrade with two new 5.5 metre high ‘Vertigo Cone’ climbing towers being installed. The undersurfacing for these is being installed this week and children will be able to play on them next week.

These and other Council playgrounds are being upgraded to meet the New Zealand Playground Standard (NZS 5828:2004 Playground Equipment and Surfacing). Recent publicity suggested that splinters were the reason some play equipment was being replaced. In fact it is because there are safety issues with the old equipment. In many cases they do not conform to the current standard, some have unacceptable fall heights and some would no longer conform to building standards. Much of the old play equipment is around 40 years old and made from timber and metal components that are gradually deteriorating. This makes it hard and expensive for the Council to keep playgrounds safe. The upgrade programme is guided by the results of an independent 2006 audit carried out on all the district’s Council playgrounds.