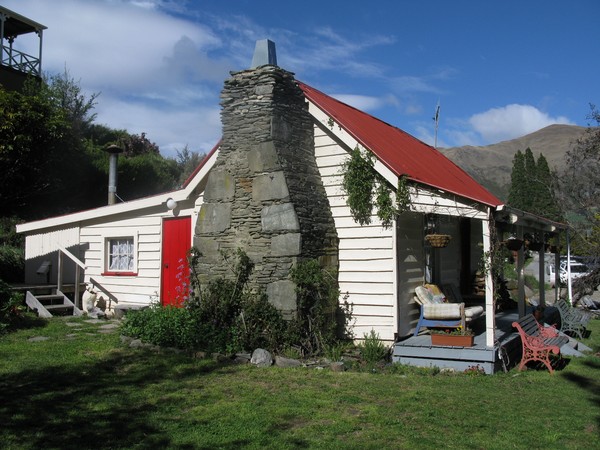 The two bedroom cottage on Youghal Street was owned by the Ford family, who previously owned a significant parcel of the surrounding land, and were one of the first families to settle in the Upper Clutha.

William Ford came to New Zealand in the 1860’s, moving to Pembroke - Wanaka’s original name - in 1866 where he worked as a farm cadet for Campbell’s of Wanaka Station. He was married in Port Chalmers in 1872 to Alexandrina nee Henderson and they raised their family in this tiny cottage.

Ford eventually became a partner in the sizable Mt Burke Station near Wanaka, and his daughter, Ada Ford, was born and lived in the cottage from 1882 until her death in 1968.

The sales consultant marketing the property, Lloyd Thayer of Bayleys Wanaka, says the cottage is a piece of the 19th century frozen in time.

According to Thayer, the current owner restored the property, rather than renovated it – using only materials similar to those that would have been used in the late 1800’s to repair and maintain the cottage.

“The cottages character has been preserved to be as close as possible to the way it was when it was first built, with a lot of its original features still intact,” says Thayer.

“The property still has the original dry stack stone chimney for the front room fire and a “Champion No1” fully refurbished and functional coal range in the kitchen. There is a detached shed a few steps from the house which houses the bathroom and laundry.”

The almost 150 year old cottage is on a 1258 square metre section, and although it’s only a ten minute stroll from central Wanaka and the Wanaka lakefront, its existence is unknown to even some of Wanaka’s oldest residents, tucked away at the end of a no exit street.

The property still has a natural fresh water spring that would have been the water source for the original owners, but is now a decorative asset to the property, with the water bubbling out over rocks under a walnut tree.

Thayer says the property could potentially be bought and developed for residential purposes, as the land the cottage is on is very valuable being in the centre of town and so close to the lake.

Alternatively Thayer says the cottage is ready to be lived in, or could be a perfect holiday home in a private and tranquil setting, with the benefit of it being close to central Wanaka.

“There has been a lot of interest in the cottage, and most people who have viewed it have been fascinated by the rich historical tapestry behind the house, and are mesmerized by the charming and relaxed atmosphere.”

“The property is literally minutes from the centre of the town, but once you walk through the trees, it’s like you’re in your own little tranquil sanctuary set in another age,” says Thayer.

This property will be auctioned November 28th 2009 unless sold prior.