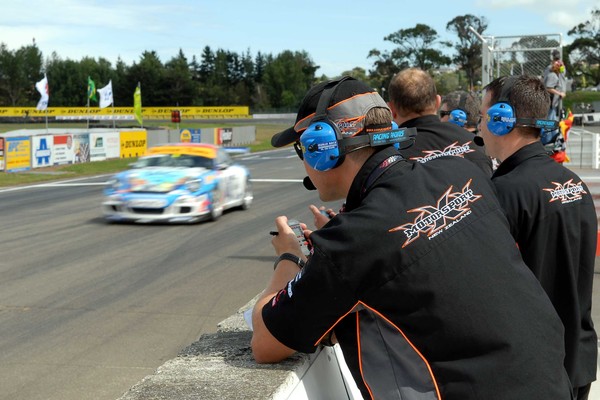 Checking progress of team principal Shane McKillen, Triple X Motorsport personnel log data to help their team to a 146-point lead after today's first race at the penultimate round of the Battery Town Porsche GT3 Cup Challenge being raced at Manfeild. CREDIT: SportProMedia 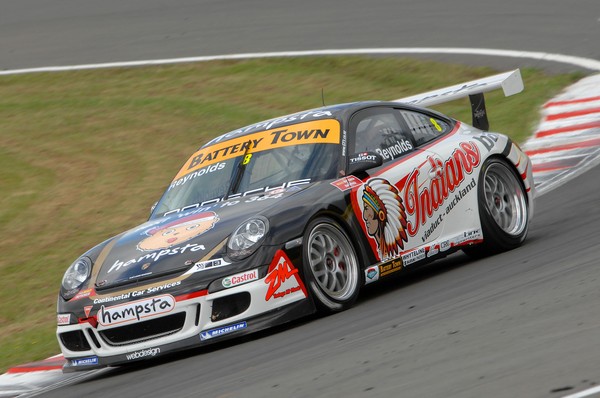 Melbourne's David Reynolds took an emphatic race victory in the wet today at the Manfeild Autocourse for the weekend's penultimate round of the Battery Town Porsche GT3 Cup Challenge CREDIT: SportProMedia

Triple X Motorsport driver David Reynolds took a convincing win in this weekend’s first of three races at the series penultimate round of the Battery Town Porsche GT3 Cup Challenge being held at Manfeild.

Starting from the front row in steady rain, Reynolds in the #8 Hampsta Indians bar Porsche 997 got the better start for the 12-lap race around the 3.03 kilometre circuit – a lead he continually extended to the chequered flag.

“We got a good start, Matt Halliday got a bit of a jump, but I got the better drive and got in to turn one leading. So I put my head down; got a few good laps in early and saved my tyres – taking the win,” said Reynolds.

Although the 24-year-old Melbourne based driver had a distracting build-up to the race when the in-board air-jack in his car failed as the team were putting it on the ground.

“It collapsed just before the start of the race when it was being used to lower the car, so there was a bit of running around to get the car properly sorted – so a special thanks to the Triple X boys for that.”

While Reynolds was out front, a battle for third see-sawed between Matt Halliday and Triple X Motorsport team-mates Craig Baird and Daniel Gaunt. Baird in the #1 Mad Butcher ZM Porsche 997 took the initial advantage, before losing track position that let Gaunt in the #3 Placemakers Hampsta Porsche 997 try for position. A skirmish involving Gaunt allowed Baird the position at the flag, with Courtney Letica in the #5 Altherm Porsche finishing behind in fourth.

Adding to the Triple X Motorsport victory count, Whangarei’s Scott Harrison drove the #5 Carpet One Suzuki to an emphatic maiden race win in the Suzuki Swift Cup series having set fastest time in the morning qualifying.

Toyota Racing Series drivers Earl Bamber and Stefan Webling started from second and third respectively on the grid for the 20-lap Dan Higgins memorial race, however neither finished despite both taking turns leading the field in the early stages.