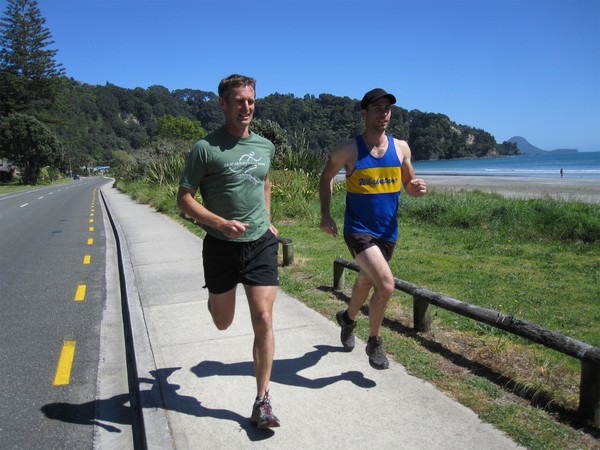 The most popular visitor to Ohope Beach, Moko the dolphin, arrived early this summer from Gisborne and has quickly made Ohope his home – much to the delight of locals and visitors.

This coming Easter Sunday the popular holiday destination, which is well known for its sunny weather, beautiful beaches and Moko, will host the Fitness Fusion Ohope half-marathon and 10km running and walking events.

Race organiser, Paul Charteris, says that he expects some very fast finishing times as both the half-marathon and 10km courses are on the flat-to-undulating roads overlooking Ohope Beach and the scenic Ohiwa Harbour. For the less serious athletes there is also a fund raising 5km ‘Doggie Dash’.

Mr Charteris said the timing is ideal for those runners who are building up to the Rotorua Marathon and he expects the event to become one of the most popular half-marathons in the North Island.

Mr Charteris said, “the turnaround point for the half-marathon course is at Ohope's beautiful West End beach which, at the moment, is one of Moko’s favourite hangout spots.”

Mike van der Boom, from Tourism Whakatane and a regular surfer at Ohope Beach, said that both Moko and the new half-marathon were two more great reasons to visit Whakatane.

Mr van der Boom posted his recent surfing experiences, with the frisky dolphin, on Moko’s Facebook page and said, "Moko would fly over the end of my surfboard, dive beneath me and then race me as I caught the wave. As I paddled back out he nudged my feet and pushed me along.

Moko loves it when people bring boogie boards and Frisbees for him to play with but, he’s getting a bit of a reputation for stealing some of them,” said Mr van der Boom.

The Ohope Half Marathon is at www.ohopehalfmarathon.co.nz Early-bird discounts continue to the end of Feb. You can plan your visit at www.whakatane.com